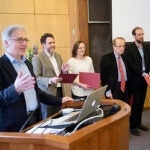 “I am thrilled that Tom is joining Harvard. We will benefit from his wealth of experience spanning all areas of finance — from capital markets to banking and real estate,” said Executive Vice President Katherine N. Lapp. “He is smart, strategic, and has likely faced every conceivable financial challenge. His service chairing the boards of Tufts Medical Center and Wheaton College has given him great insight and appreciation of higher education.”

Hollister enjoyed a 35-year career in the banking and energy sectors, and has served on numerous nonprofit and corporate boards. Early in his career, he joined Bank of Boston and swiftly rose through the ranks, filling many roles in commercial banking and commercial real estate before becoming executive vice president of consumer and small-business banking.

In 1998, Hollister was named president of Citizens Bank of Massachusetts, the second-largest bank in the commonwealth at the time and part of Citizens Financial Group. He oversaw all banking activities, regulatory relations, and public affairs and communications during a period of rapid growth. During his time with Citizens, the bank was the leading lender to small businesses in Massachusetts, earning “outstanding” Community Reinvestment Act ratings.

Hollister spent most of the second half of his career as a strategist. As vice chairman of Citizens Financial Group, he moved to Chicago to lead Charter One Bank, a large multi-state enterprise, through the merger with Citizens Financial Group. He then returned to Boston, where he was tapped in 2006 to be the chief operating officer and chief financial officer of Global Partners LP, a Fortune 500 energy-distribution company based in Waltham.

Hollister’s nonprofit board service has included chairing the boards of Tufts Medical Center and Wheaton College. He played an important role in maintaining Wheaton’s financial health and strategic vitality during and following the financial crisis of 2008.

“This is a tremendously exciting time for Harvard, and I couldn’t be happier that Tom has agreed to come on board,” said University Treasurer Paul Finnegan. “His experience and deep roots in the community will be a significant asset to Harvard.”

As a longtime Boston resident, Hollister is the former chair of the Greater Boston Chamber of Commerce and remains on its executive committee. He is a proprietor of the Boston Athenæum, a fellow of the Massachusetts Historical Society, and a member of the Commercial Club.

“It is an incredible privilege to join Harvard in this role, and I look forward to working with others across the institution to advance the University’s mission and its success,” said Hollister.

Reporting to the executive vice president, Hollister will oversee Harvard’s financial administration and an array of activities encompassing financial planning, financial reporting, capital structures and debt management, cash management, and funding principles and strategies for physical plant assets. His arrival follows a national search for a successor to Dan Shore, who stepped down in October.

Hollister takes the reins as Harvard’s new CFO and VP for finance in mid-May.