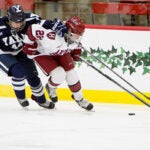 The Harvard women’s hockey team will make its return to the Frozen Four this year as the third-seeded Crimson (26-5-3) stormed past the Quinnipiac Bobcats (26-9-3), 5-0, on Saturday in the Bright-Landry Hockey Center. Harvard will make its sixth appearance in the Frozen Four, first since 2008.

Harvard’s opponent on March 20 in the University of Minnesota’s Ridder Arena will be a familiar one in No. 2-seed Boston College. This will be the third match-up of the year and a rematch of the thrilling 2015 Beanpot Championship in February.