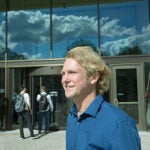 Geologist will discuss issues involving where the Bible and research intersect

David Montgomery is a rock star. Literally. A prominent geologist, his work on landscape evolution earned him a 2008 MacArthur “genius” award. His most recent work explores an unexpected crossroads: where geology intersects with the Bible. His 2013 book, “The Rocks Don’t Lie: A Geologist Investigates Noah’s Flood,” examines how flood and creation stories influenced the history of geology.

Montgomery will speak about his work at the Radcliffe Institute for Advanced Study’s Knafel Center on Thursday at 4:15 p.m. The session is free and open to the public.

In an interview with the Gazette, Montgomery, professor of earth and space sciences at the University of Washington, discussed his latest work and the seemingly intractable divide of science versus religion.

GAZETTE: Can you explain why a geologist would write a book about the world’s flood stories?

MONTGOMERY: It started on a field expedition in southeastern Tibet, when we discovered evidence for the failure of a glacial ice dam that sent an enormous flood surging down the gorge of the Tsangpo River (the upper Brahmaputra). I was surprised to find that the local villagers had an oral tradition of such a flood having occurred around the eighth century — and even more surprised when our carbon dates came back from that time period. It got me wondering about how many of the world’s other flood stories might have their roots in geological events.

GAZETTE: You’ve said that the roots and origins of geology can be traced back to an attempt to formalize, through rational analysis, the explanation of Noah’s flood. Can you elaborate a little?

MONTGOMERY: I didn’t expect to learn this, but if you read 17th- and 18th-century works from the early days of geological thought, you quickly notice how most frame the interpretation of what one can read in the rocks through the lens of Noah’s flood. In a sense, Noah’s flood was the default theory for what had laid down the rocks and shaped topography. After Nicholas Steno, the Catholic bishop widely revered as the intellectual founding father of geology, developed his principles for reading the rock record, he used them to interpret the story he read as involving Noah’s flood as a key event in the history of the world.

Confident that investigating the geological story using reason would reveal the story of creation, early investigators used Steno’s principles to start reading Earth’s autobiography. In so doing, they found that the world was far older than they had imagined — and eventually showed there was no evidence for a global flood. This, in turn, triggered 19th-century arguments over how to reinterpret the biblical stories of creation and Noah’s flood. And therein lies important roots of the modern conflict between creationism and science.

GAZETTE: Do you feel like your work has helped to diffuse the science versus religion debate? How?

MONTGOMERY: I think that a better understanding of the history of thought both in geology and in theology would better focus such debate. No, I don’t think that my work has moved the needle on this issue. But I would frame the debate as not between religion and science but rather as between creationism and science. I think that it is unfortunate that cultural debates such as the recent one between Ken Ham and Bill Nye generally overlook how the geological model of a global flood that creationists offer to undercut evolution was soundly refuted before Darwin ever set off around the world on The Beagle.

GAZETTE: Do you think this fundamental conflict between science and creationism is dangerous today?

MONTGOMERY: Yes, very much so. We have such enormous problems to confront in this century around the basic way that our world works — with looming crises around soil, climate, energy, and water — that focusing societal energy on rehashing arguments that were widely viewed as settled by the end of the 19th century verges on collective insanity. It would be more beneficial for religious faith to help guide humanity to become better stewards of creation, as many people of faith are quietly trying to do.

GAZETTE: Why the either/or divide on science versus religion, in which we treat them as polar opposites? Are they?

MONTGOMERY: Science and religion certainly approach seeing and understanding the world from opposite directions, and they do come into conflict when scientific discoveries contradict religious beliefs about the material world. But in doing the research for my book, I was surprised to learn about the long-running view in Christian theology that God���s two books — the Bible and nature, creation itself — could not contradict one another because they shared the same author. In other words, there is a strong tradition in Christianity that what one can learn from the study of nature must inform how one interprets the Bible. While the collective enterprise of science does not need any particular religion, or religion at all, all religions must grapple with how to interpret their own beliefs in the context of scientific discoveries about how our world works. I’ve come to see the war between science and religion as better viewed as a conflict within religion over how to view science.