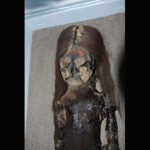 For nearly a century, the debate has raged among evolutionary biologists: When working to understand how our early human ancestors developed, should juvenile fossils be thought of as fundamentally human or apelike?

A new Harvard study suggests the answer is neither.

The study, authored by Tanya Smith, associate professor of human evolutionary biology, with colleagues from around the globe, shows that the teeth of early hominins grew unlike those of either modern humans or apes, suggesting that neither can serve as a useful proxy for estimating the age or developmental progression of juvenile fossils. The study is described in a paper published in PLoS One.

“This isn’t the first study of its kind, but it’s certainly the largest and most comprehensive,” Smith said. “We calculated the age of death of 16 fossil individuals that lived between about one and four million years ago, and were able to look at how their teeth formed relative to living humans and chimpanzees of the same chronological age. What we found is that neither is a perfect predictor for how these fossil species developed, so we should be cautious in modeling early hominins as being just like apes or just like modern humans.”

Though the teeth may seem an odd place to start, they actually offer Smith and other evolutionary biologists a near-perfect record of how early human ancestors developed.

“Tooth growth is often thought of as a good proxy for childhood, because we often define the end of childhood as being the time when you stop erupting your teeth,” Smith said. “If we can look in the fossil record and see the rate and timing of key steps in dental development, we can infer something about these species’ overall development, which includes reproductive age and lifespan, so what we’re really studying here is their life history.”

Determining precise ages for fossilized teeth, however, is far easier said than done.

For decades, the only way researchers could closely examine fossilized teeth was through sectioning — literally cutting into the fossil — and using microscopes.

Smith and colleagues, however, turned to a more modern technique. Using a synchrotron, essentially a particle accelerator that generates high-powered X-rays, they created super-high-resolution images of the internal structure of the teeth that enabled them to identify and count the daily growth lines — akin to rings in a tree — to determine an exact age.

To their surprise, Smith said, the images revealed wide variation in the speed of development across the fossil species. Though all developed faster than modern humans, some showed signs of developing as fast, and even faster, than apes.

“We found more variation in the fossil humans than we had expected,” Smith said. “What that means is we can’t simply adjust the human or ape model in one direction or the other.

“This has been a fight for 80 years or more,” Smith continued, “whether we should infer, when we find these juveniles in the fossil record, that they were like a modern human or were they like a chimpanzee? We now have an independent way to get at how ape- or human-like these ancestral species were, and it turns out they … really need to be considered on their own.”

Ultimately, Smith said, researchers hope that understanding how our early ancestors developed will shed new light on how the unique development pattern of modern humans emerged.

“The evolution of our development has been very complex, and we need to be cautious about simplistic explanations of what our early human ancestors were like,” Smith said. “But this also validates something we’ve long argued, which is that our modern pattern of growth and development, in which we have this prolonged period of childhood and adolescence, is really unique. These fossil species have to be seen independently, as having their own evolutionary trajectory that is not identical to any living animal.”