Smarter by the minute, sort of 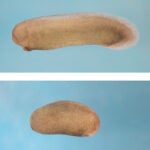 New research is changing long-held ideas of how our minds age, painting a richer picture of different cognitive skills peaking across a lifetime, with at least one — vocabulary — peaking at a time when many are considering retirement.

The study, supported by results from tens of thousands of volunteers who participated in a series of online tests, also hinted that at least some cognitive skills are plastic and that their decline can be delayed by changes in education, environment, or lifestyle. Researchers’ analysis of existing tests from different decades showed vocabulary skills peaking later and later in life, a trend they ascribe in part to improvements in education and the rise of white-collar jobs.

“What we’re seeing is that, across adulthood, some things ‘age’ in the sense that processing speed does go down,” said co-author Laura Germine, a research associate in Harvard’s Psychology Department and a postdoctoral fellow at Harvard-affiliated Massachusetts General Hospital. “But other things are doing something very different from what is implied by the word ‘aging.’ They’re maturing, they’re getting refined over time. For the everyday person, the word ‘aging’ implies a breakdown of things. ‘Ripening’ might be better.”

Germine conducted the research with Joshua Hartshorne, a postdoctoral fellow at the Massachusetts Institute of Technology. Published this month in the journal Psychological Science, it presents the results of a fine-grained analysis enabled by the many volunteers — more than 48,000 — who went to www.testmybrain.org and www.gameswithwords.org and took a series of game-like tests that measured an array of cognitive skills, including brain processing speed, memory, emotional cognition, and so-called “crystalized intelligence,” the application of learned knowledge such as vocabulary and arithmetic.

The results present a much more nuanced picture of changes in cognitive skills over a lifetime than that provided by current theoretical frameworks, Germine said. It has traditionally been believed that many cognitive skills peak early — late teens and 20s — and decline with age, with crystallized intelligence, thought to peak in the 40s, being the exception. 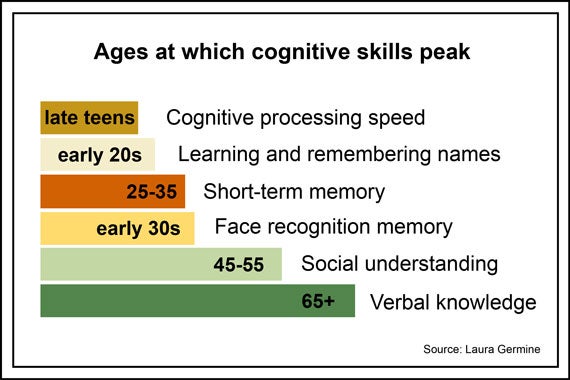 The view that there is a broad decline in most cognitive skills likely emerged due to limitations in the population that can be easily tested for studies on aging, Germine said. Because most adults are busy working and raising families, they have little time to come to a lab and participate in experiments. Instead, she said, such tests are most often taken by college students and by retirees, giving psychologists a good view of the two ends of the lifespan but much less data about what goes on in between.

“Regular old adults have been some of the hardest participants to get for this kind of research,” Germine said.

The Web-based tests used by Germine and Hartshorne (who runs gameswithwords.org) are different because they can be done from any computer and take just a few minutes, making them more accessible to working adults. The trick in designing such tests, Germine said, is to make them engaging so that participants feel rewarded enough to take a second test, or to tell others.

The two began working together as Ph.D. students at Harvard after Germine published results from online testing in 2011 showing that the ability to recognize and remember faces peaks between ages 30 and 34, later than was thought. Hartshorne approached Germine because work he was doing on a different aspect of memory also showed a later peak than the accepted average.

Because Hartshorne too had gathered his data through Web-based experiments, the pair worried they were measuring some quirk of people in their late 20s and early 30s who used the Internet. So they obtained the results of older, paper-based tests of intelligence and memory, broke down the data, and reanalyzed it to see if it revealed the same unexpected peaks as the Web findings. To their relief, it did.

The pair then continued with the study released this month, which shows a series of cognitive peaks through life. Peak mental processing speed occurs, as expected, in late teens and early 20s and declines relatively rapidly afterward. But other skills peak at different times. Working memory climbs in the late 20s to early 30s, and then declines only slowly over time. Social cognition, the ability to detect others’ emotions, peaks even later — in the 40s to age 50 — and doesn’t start to significantly decline until after 60.

“That fits with absolutely no theoretical framework that we currently have,” Germine said.

Crystalized intelligence, measured as vocabulary skills, didn’t have a peak. Instead, it continued to improve as respondents aged, until 65 to 70. The result was so startling, it sent Germine and Hartshorne back again to paper tests — this time the large-scale General Social Survey. Their first look at the GSS indicated that vocabulary skills peaked decades earlier than in their study, from 45 to 50. But before dismissing their own results, the researchers decided to break down the GSS by decade.

Germine attributed the change in vocabulary skills over time to broader changes in society, including an increased emphasis on education, both early in life and lifelong; the rise of white-collar jobs that require more reading and writing; and to a general improvement in nutrition and physical well-being, factors that support cognitive health.

Baby boomers “are the most educated generation of all generations that have ever retired,” Germine said.

Though the research enriches scientific understanding of changes in cognition, in many ways it only confirms what people in their homes, schools, and workplaces already know, Germine said.

“A lot of people have this intuition that one matures as one gets older. It’s not just because there’s more information in the brain, there’s lots of other things, too. As we get older, we get better at solving certain kinds of problems, though we may not have the quickness of our 20s. It’s a rich process of change. … In a lot of ways, our results are surprising from a theoretical standpoint, but they also kind of really make sense.”