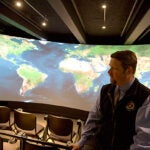 Physics holds a profound beauty, rooted in the natural world it describes and whose attraction is at least part of what draws some to the science, says Jacob Barandes, associate director of graduate studies for the Harvard Physics Department.

But that beauty is often coded in the equations and theories that are the discipline’s language and only emerges with mastery, keeping novices at arm’s length.

“The aesthetic side is tremendously important,” Barandes said. “It’s one thing we don’t do a good enough job with [for] introductory students. They don’t get to see this deep, deep beauty until further along in their physics program, and that’s a shame.”

This year, Harvard’s physics faculty members have some help from someone who, though not an expert in the science, has the aesthetics nailed.

Maine-based sculptor Kim Bernard is spending a year in the department as artist-in-residence, bringing along an interest in the beauty of movement — which sets her kinetic works apart, a curiosity about the physical laws that underlie her art, and a gregarious determination to make the most of her time at Harvard.

“I’m an artist, not a physicist, so I’m learning along with the students in class,” Bernard said recently while sitting in the Science Center’s Greenhouse Café. “I’m particularly interested in any area of physics that has visual potential. When you’re talking about mathematical equations, if I can’t see it, I can’t see how to apply it to creating art, but when you’re looking at fractals, waves, and optics … that’s very visual.”

Bernard, whose appointment began in January, is spending her year not making art directly, but rather learning about physics and meeting as many people as she can — through the Friday “Lunch with the AIR” sessions she hosts, one-on-ones with professors, and regular attendance at a handful of courses. She is also doing her best to get others thinking about making art, even as she lays a foundation for her own future projects.

“I’m idea-gathering,” Bernard said. “If I [were working on a sculpture] I would be focused on one project and be in my own world instead of engaging with the physics community. I’m absorbing it all now, getting my ideas on paper, sketching, writing … my notebook is just filling up.”

Monica Hersher, a freshman who is considering physics as a concentration, has been meeting with Bernard weekly to discuss a variety of topics. Sometimes the two talk about physical principles, sometimes they brainstorm ideas, like the notion that artists and physicists are really doing the same thing, seeking “an elegant view of the universe,” albeit from different directions.

“It forces you to think about physics from a different perspective,” said Hersher, who has been interested in art and science since high school.

Though Bernard claims to not have gotten much from her last physics class — in 10th grade, in the early 1980s — her art has a decidedly physics-friendly bent. Her moving sculptures harness waves, pendulums, elasticity, and spinning wheels. The work came to the attention of Barandes in 2012, when his wife attended an event at the Boston Sculptors Gallery, where Bernard was exhibiting.

“She was able to use physics as a paintbrush and do more with her art than many other artists,” said Barandes, who after viewing videos of Bernard’s work encouraged her to contact the then-chair of the Physics Department, Mallinckrodt Professor of Physics Melissa Franklin.

After a look at the art, Franklin — an experimental physicist who emphasizes the importance of hands-on “making” to her students — thought having Bernard in residence would be a good idea.

“We try to get students to be more creative, open-minded, working with their hands,” Franklin said. “It made a lot of sense and the students really like it. … I’d love to have an artist-in-residence all the time.”

Bernard, for her part, is seeking to make the most of the opportunity. She stays in Cambridge five nights a week, spending weekdays on campus. After spring semester she plans to ease up a bit, shifting more of her focus to her Maine studio and her teaching responsibilities elsewhere.

As to what fruit the project will bear, Bernard and faculty members aren’t quite sure. Art is a good bet — from both Bernard and the students she interacts with — and perhaps a greater appreciation of beauty in physics among students, staff, and faculty.

A strengthened community is another possibility, said technician Rob Hart, director of the physics teaching laboratories. Hart has watched the “Lunch with the AIR” sessions fill up, and noticed more people stopping by the third floor SciBox experimental learning space to talk with Bernard.

“I’m really excited to see the way things go,” Barandes said. “In the grand tradition of science, this is an experiment.”