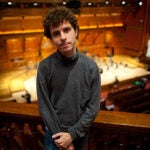 Henri Cole gives an insider’s view of the poetic life

Henri Cole has published eight poetry collections, including “Middle Earth,” a Pulitzer Prize finalist in 2004. His new collection, “Nothing to Declare,” will be released March 31. He is working on yet another volume of poetry while a fellow at the Radcliffe Institute for Advanced Study, as well as a work of nonfiction tentatively titled “Orphic Paris.” The project mixes autobiography, art, and history, with digressions about poetry. A teacher at Ohio State University, Cole recently spoke with the Gazette about his work.

COLE: All my work blends autobiography and memory. To me, truth is the most important thing in art, after originality. Every good poem must be a little concerto of words. But also, it must be emotionally true.

GAZETTE: Do you approach poetry and nonfiction differently?

COLE: There are so many more words in prose. A poem is like a bottled genie. The bottle makes the genie stronger. Prose is like a great oak on a landscape. The nonfiction I am writing is a poet’s prose, which is to say it expands and contracts, like stanzas, and is descriptive and meditative about life in Paris.

Radcliffe Fellow and poet Henri Cole reads some of his poems for the Harvard Gazette.

GAZETTE: Do you encourage people to read poetry out loud?

COLE: When I am writing, I always read aloud to test out the sentences against my ear, though a sense of rightness is completely intuitive and individual. In the classroom, I often ask students to memorize and recite poems by others. It’s like being a medical student and cutting into bodies to see how they are made.

GAZETTE: Do you have a poetic form that you prefer, or one you don’t like?

COLE: Many of my poems are free-verse sonnets. I wrote three books of them. To me, the Italian sonnet, with its octave and sestet, is like a deep inhale and transformative exhale. If you are a lyric poet, as I am, it’s a perfect form to both delight in language and say something true.

GAZETTE: What effect does geography have on your writing? Do you think or write differently in Paris versus here or other places?

COLE: In Paris, or Kyoto, or Berlin, or Rome — where I’ve lived — everyday life didn’t nibble away at me. I woke up and worked. I had adventures in the afternoon. Art and culture were great solaces to me. I think travel has pushed me to try things I would never dream up in the little trough of my everyday life.

GAZETTE: What is the hardest thing about writing poetry? What about nonfiction?

COLE: For me, the hardest thing — in both poetry and prose — is to reveal the less-attractive sides of myself. Sometimes, long afterward, poems really embarrass me, but I am proud of the young man who was able to write it all down.

GAZETTE: You grew up in a house where French, English, and Armenian were all spoken. Did that exposure to so many languages influence your choice of career?

GAZETTE: If you weren’t a writer, what would you be?

COLE: I think a mother is the holiest thing. I would like to have been a parent. But I think my poems are my progeny. After I am gone, I hope people will say, “He worked hard.”