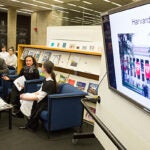 As the saying goes, “From those to whom much is given, much is expected.” For more than a decade, much has been expected from ZZ Packer, the gifted writer whose breakout story collection left critics and fans wanting more.

“I don’t think I can remember where I last encountered a debut collection that so justified its existence, that buzzed with so much credibility and attitude,” read one review of “Drinking Coffee Elsewhere” (2003), eight stories that vividly capture the complicated rhythms of contemporary American life.

The wait for a follow-up may soon be over. As the Lillian Gollay Knafel Fellow at the Radcliffe Institute for Advanced Study, Packer is working on a sweeping novel titled “The Thousands” that follows the lives of several families from the end of the Civil War through the American Indian campaigns in the Southwest. The author is unfazed by the extended lead-up to her sophomore effort, except when pressed by her publishers. “The longer they wait,” she said, “the better they expect it to be.”

But good writing takes time, noted Packer, 42, during an interview in her Radcliffe office, and life can get complicated. Since starting work on “The Thousands” she has married, divorced, had two children, and struggled through custody battles and six moves, including two cross-country treks. (Also in the mix: a spot on The New Yorker’s list of the country’s top young writers.) The novel’s narrative has changed, too, with Packer throwing “hundreds of pages away” to arrive at the right place.

“Your conception of something can change so completely, but you can still be writing the same thing,” she said.

Packer’s original narrative focused on buffalo soldiers, regiments of African-American men who served west of the Mississippi River following the Civil War. The idea sprang from talks with her grandmother, the daughter of a Southern sharecropper who moved the family north in search of a different life. “The wandering mind part of me just began thinking about those that didn’t go north the way that everybody else did,” she said. “I wondered, ‘What about the ones who went west?’”

But as she delved deeper, she gravitated toward a broader exploration of Reconstruction and “what happened in America during this time period, and what happened with African-Americans that led us to how we are now.” From the outset it was clear that “The Thousands” required a “bigger treatment” than the short story could provide.

“The feeling of a novel is of having lived this life, or a life,” Packer said. “I like that the novel can do that as a form.”

To capture that sense of time and place Packer logged long hours at the National Archives in Washington, researching how sugar-cane production drove labor in the South (her protagonist works in a Louisiana cane field) and developing a period-specific perspective on challenges for the hearing-impaired (another main character is deaf). Books such as “Bad Hand: A Biography of General Ranald S. Mackenzie” and “The Military and United States Indian Policy, 1865-1903” rest on her desk at Radcliffe.

But the work has been as much a personal as a historical journey for Packer, who always hopes to learn something about herself when building complexity into her characters. “In a sense, it’s my way of understanding my own weaknesses and foibles and how not to repeat them.”

She is frank about getting stuck. To work through a recent creative dry spell, Packer drafted a flow chart that included descriptions of her different types of writer’s block and practical ways forward. “This is actually me doing something to get out of it,” she laughed, pointing to the intricate diagram on her computer screen.

Another resource is her vast collection of books.

“I’ll wonder sometimes just how writers do certain things. It’s like a little note in your mind to go back to look at what they’re doing, what they did well that produced that feeling in you.”

Joyce, Melville, and Shakespeare all have their “stylistic tics,” Packer said, and their pages offer up new things that each “brought to the form.” She reaches for Toni Morrison’s “Beloved” when “just trying to see what the language can do.” She will thumb through works by Malcolm Gladwell looking for “a sentence that’s universal.” Colson Whitehead’s writing “looks new” she said, “but has a sort of noir component.”

Growing up in Atlanta, Packer fell in love with words during her daily trips to the local library with her mother. Coming-of-age stories by Judy Blume, the sleuthing of “Harriet the Spy,” and young-adult novels by S.E. Hinton were among her favorites. In high school she read “whatever there was.” Her passion for writing and reading developed in tandem — when she wasn’t reading, she was scribbling down snippets of stories, plays, and poems.

“I’d always loved writing because I’d loved reading. I think people who are readers are inevitably interested in how it’s all put together, what literature is and how it works.”

She learned an important lesson about how it works during a reading before high school classmates. The story was “melodramatic and overblown,” remembered Packer, but it also resonated with her teenage audience and introduced her to the power of making people “feel something” with her words. “I think that that’s the kind of thing that isn’t emphasized enough when younger writers begin to write.”

As an undergraduate at Yale, Packer opted for literature over engineering and spent much of her time at a local bookstore, scanning the shelves and reading as much as she could. “That was where I first read Updike. I liked the visual quality of being able to see all these fiction titles and their covers … luckily they didn’t kick me out.” She did graduate work at Johns Hopkins University and the Iowa Writers’ Workshop, and later became a Stegner Fellow at Stanford University. But even after years as a successful writer and teacher, Packer hesitates to endorse the profession.

“In a way it requires an obsessiveness that’s not going to be taught. And that obsessiveness of trying to figure out how to be a better writer is not a very good thing to recommend to people.”

Still, on a recent afternoon Packer engaged with students from across the University who had signed up for a luncheon and a chance to ask the author about the work that has become her life. Great writers, those who craft vivid, believable characters and prose, are great observers of human behavior, said Packer. She encouraged her listeners to experiment with different forms, to hone their styles by reading and writing as much as possible, and to be prepared for success to take time.