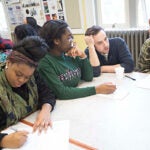 Lessons in the power of theater

Collegiate athletics’ oldest rivals will meet at the famed Palestra with an NCAA tournament berth on the line as the Harvard men’s basketball team and Yale square off in a one-game playoff Saturday. Tipoff is scheduled for 4 p.m. live on the American Sports Network and ESPN3.

The Crimson and Bulldogs finished the 14-game tournament in a tie for first place after Harvard defeated Brown on March 7, 72-62, and Yale fell at Dartmouth, 59-58. The Ivy League co-champions will now face one another for a third time this season with the winner earning the conference’s automatic bid to the Big Dance. Harvard took the first meeting between the teams in New Haven, 52-50, before the Bulldogs prevailed in Cambridge, 62-52.