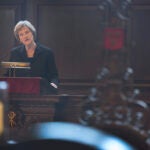 Remembering, and returning to, Selma

With the loss, the Crimson (20-7, 10-3 Ivy) slips to one-game behind the Bulldogs (22-8, 11-2) in the Ivy League standings with one game to play. Harvard will host Brown on Senior Night Saturday at 6 p.m., while Yale will visit Dartmouth at 7 p.m. The Crimson will face the Bears live on the CBS Sports Network.

Harvard now trails Yale by one game with one game remaining, and needs a win versus Brown on Saturday coupled with a Yale loss at Dartmouth to tie the Bulldogs for the Ivy League crown and force a one-game playoff for the conference’s bid to the NCAA tournament.