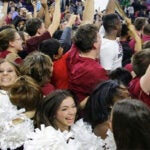 Set to play No. 4 North Carolina on Thursday in Jacksonville, Fla.

The Harvard men’s basketball team received a No. 13 seed in the upcoming NCAA tournament and will face fourth-seeded North Carolina in the second round Thursday. Tip off is scheduled for 7:20 p.m. live on TNT at Jacksonville Veterans Memorial Arena in Jacksonville, Fla.

Harvard punched its ticket to the Big Dance on Saturday when it defeated Yale, 53-51, in a one-game playoff. The Crimson and Bulldogs shared the Ivy League championship with identical 11-3 conference records, the fifth straight Ivy title for Harvard, and played in just the ninth playoff game in Ancient Eight history for the right to represent the league in March Madness.