Making the most of meals 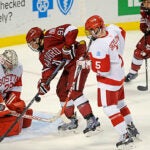 Harvard University recently launched an effort to address chronic hunger among its neighbors in Cambridge and Boston by partnering with the local nonprofit Food for Free to donate nearly 2,000 nutritious meals each week to families in need. The initiative builds on Harvard’s long commitment of community engagement, which includes extensive partnerships with local schools and creating and preserving affordable housing.

To ensure that breakfast, lunch, and dinner are available for every undergraduate, Harvard University Dining Services regularly purchases more food than is actually consumed. In the past, excess fresh food has been composted. The new program ensures that untouched food is instead provided to those who need it.

“This is a new initiative ― a new type of idea,” said Sasha Purpura, executive director of Cambridge-based Food for Free. “The food from Harvard is very healthy, easy to reheat, and simple to serve. None of it has to be cooked from scratch, which is not only time-consuming, but oftentimes not possible as some of our recipients live in motels or on the street where cooking options don’t exist. This is a new way of doing food redistribution and it has really been making a difference in the battle on hunger.”

According to surveys, one in nine residents of Eastern Massachusetts doesn’t know where the next meal will come from, with nearly half of the group made up of children and seniors. The Greater Boston Food Bank alone has seen a 21 percent increase in requests for food assistance since 2008. Meanwhile, roughly a third of the food produced for human consumption is lost or wasted, according to the United Nations Environmental Programme.

“Every day, too many families and individuals are forced to make very difficult choices — choices between eating or paying rent or utility bills,” said Meredith Weenick, Harvard’s vice president for campus services, which oversees HUDS. “At the same time, Harvard is aggressively seeking to minimize consumption and waste while implementing sustainable programs that increase efficient use of all that we consume on campus. Our partnership with Food for Free assures that any food we offer our students beyond what is utilized also serves our neighbors, so this really is a win-win for everyone involved.”

In Harvard’s 14 undergraduate dining halls, the challenge is to maintain a menu that matches the demand of students, nearly 98 percent of whom live on campus and participate in the meal plan. As such, every location has a modest amount of food beyond what is consumed ― including salads, soups, main dishes, and sides. On an average day, the dining halls feed breakfast, lunch, and dinner to more than 6,600 students. That comes to nearly 20,000 meals a day.

While HUDS continually monitors consumption, it is impossible to predict precisely how many students will eat and how much they will eat at any given meal. Since 2005, a student peer-to-peer outreach program designed to reduce food waste has halved the amount food being discarded that could otherwise be donated. (Composting has been and will remain part of Harvard’s extensive waste-reduction efforts.)

Harvard tested the program last summer using the excess from Annenberg dining hall. Based on its success, all 14 dining halls on campus were brought into the program. In a typical week during the academic year, Harvard may donate up to 2,500 pounds of quality food that was never served. Given that the average meal is 1.3 pounds, each week approximately 2,000 meals are donated to needy families. In the six months since the program began, Harvard has donated more than 40,000 pounds of food.

“HUDS has long been committed to giving back to the local community through food donations and various philanthropic activities,” said Managing Director David Davidson. “But this new Harvard food program formalizes and greatly enhances this giving in a way that is more effective, more wide-reaching, and more in line with the University’s commitment to sustainability.”

The Harvard Sustainability Plan, released in October 2014, set an on-campus per capita waste-reduction goal of 50 percent by 2020. The Harvard Food Better campaign is engaging the entire University community in a dialogue about the food system, including waste. The Deans’ Food System Challenge, hosted by the Harvard Innovation Lab, is bringing together teams to develop solutions that make the food system more healthy and sustainable.

“This new program further demonstrates Harvard’s interest in partnering with providers in the community to create innovative efforts to support local families,” said Kevin Casey, associate vice president for public affairs and communications. “This is a wonderful example of what can happen when local organizations work together to help meet an important community need.”

“This is a sustainable program that reflects Food for Free’s mission to address the needs of local families on a daily basis,” said Purpura. “It is a model that is replicable and we hope that our pilot program with Harvard will both feed families and raise awareness at other institutions of higher learning and organizations in Cambridge. We are incredibly excited about this partnership and are looking forward to doing much more in the coming months.”

The Cambridge Community Center, which is adjacent to the Peabody Terrace complex, is one of the local organizations receiving donations. The center serves 40 families a week through its after-school program, and has also served the food during family night gatherings and other special events. Eventually the center will have the ability to send after-school students home with meals for their families. A contribution from Harvard helped the center purchase a commercial freezer for storing donations.

“These meals can make a real difference for some of our most vulnerable families. We are proud to work with Harvard, Food for Free, and other local organizations in helping to feed our community healthy, wholesome, and delicious food,” said Darrin Korte, director of programs at the Cambridge Community Center.