Lessons in the power of theater 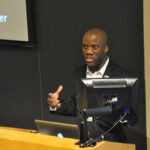 The magic to breaking down barriers

At Boston Green Academy (BGA) in Brighton, Brendan Shea, manager of education and community programs at the American Repertory Theater (A.R.T.), wrote words on a whiteboard as the audience called them out.

“Worth. And oppression,” another volunteered.

The crowd of advanced placement English students, who had seen the A.R.T.’s production of Suzan-Lori Parks’ “Father Comes Home From the Wars (Parts 1, 2, & 3)” the day before, were sharing their thoughts about the Kennedy Prize-winning Civil War drama.

A.R.T. educators helped the students delve more deeply into the play, encouraging them to share their thoughts, providing a scene for them to read aloud, and even asking them to write their own epic poems about the experience.

The A.R.T. had been connected with BGA in part through Harvard’s Public School Partnerships, a program that works across the University to bring resources and opportunities to local schools.

Part of the appeal for the young students, Shea said, was the language and scope of Parks’ vision.

“Parks’ work can be seen as a mash-up of Greek dramatic forms with contemporary language and issues. We wanted the students to go through a similar process to the playwright’s, in a way, by digging out the themes and rewriting something original and lyrical on each theme.”

“All of the students were so enthusiastic about it,” said Corina Rangel, a 10th and 11th grade humanities teacher at BGA. “For some of them, this was their first experience with theater. It’s amazing that the A.R.T. is not just welcoming to students, but actively encouraging them. They sought us out, and to incorporate young voices in that way, and help young people access the theater — to help them experience that is wonderful.”

Shea and his co-facilitator, Nicole Shelpman, recently carried out similar exercises with students at Cambridge Rindge and Latin School (CRLS), posting that group’s epic poem on the A.R.T. site as well.

“What was so interesting about this piece was our [classroom] discussion,” said Monica Murray, a drama teacher at CRLS. “It really opens students up to ideas — the ideas of themes, literature — and it brings the ideas they’re working on in the classroom to life.”

A.R.T. Education organized trips for students to see the play. Then, working with Harvard Public Affairs and Communications (HPAC), Shea and Shelpman coordinated workshops with BGA and CRLS to deepen the theater experience for students. For Shelpman, a Harvard Graduate School of Education student, the workshops served as the cornerstone project of her two-month internship at the A.R.T.

“The Public School Partnerships team is always looking for opportunities to bring students from both Boston and Cambridge onto Harvard’s campus to participate in new experiences across many fields,” said Kevin Casey, associate vice president for public affairs and communications. “In addition to engaging on campus, PSP also looks for ways to bring Harvard’s resources directly into local schools. This partnership with A.R.T. was the perfect example of both of those goals.”

The workshops gave students a chance to “create something new out of Parks’ words,” Shea said, helping them get into the mind of the playwright, who won the Pulitzer Prize in 2002 for “Topdog/Underdog.”

“For students to come and see a play on its own has its own merit,” Shea said. “But it’s important to provide as many students as we can with another way into the experience of live theater. This is a challenging, intense, and timely play, and to be able to spend time with students, to get them to meet the playwright halfway ― that can be a powerful place to begin the conversation.”