Keys to a split-second slime attack 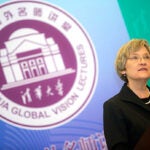 Lessons for science in the secret weapon of the velvet worm

The velvet worm is a slow-moving, unassuming creature. With its soft body, probing antennae, and jointless legs, it looks like a slug on stilts as it creeps along damp logs in tropical climates.

But it has a secret weapon. In the dark of night, when an unsuspecting cricket or termite crosses its path, the worm unleashes an instantaneous torrent of slime. Two fine jets of gluey substance spray out of openings on it head, casting a sticky net that entraps prey.

Captivated, so to speak, by the worm’s split-second attack, researchers from the Harvard School of Engineering and Applied Sciences (SEAS) and from universities in Chile, Costa Rica, and Brazil began studying the creature from all angles. How, they wondered, could such a slow, neurologically simple worm execute such a rapid and perfectly aimed movement?

By applying insights from anatomy, mathematics, experimental physics, and fluid dynamics, they now have an answer — published Tuesday in Nature Communications — and the findings could inspire new microfluidic devices.

Imagine a large syringe equipped, at its narrow tip, with an elastic tube shaped like the neck of a bendy drinking straw. That is apparently the velvet worm’s slime-shooting apparatus, from its tail end — where the slime is produced and stored in a reservoir — to a pair of tiny nozzles, called papillae, on its head. Given this structure, a slow and gentle squeeze on the reservoir is all it takes to eject the slime with great speed and force. Most important, the shape and elasticity of the papillae ensure that as the slime exits, it sprays in all directions, like water from a flailing hose.

“The geometry of the system allows the worm to squirt fast and cover a wide area. That’s the magic,” said lead author Andrés Concha, formerly a postdoctoral fellow at SEAS and now an assistant professor at Adolfo Ibañez University in Chile.

But that’s not the whole story, as Concha explained. A garden hose is much larger than the tube inside a velvet worm’s papillae. To get the flailing-hose effect within such minuscule passages, with a diameter ranging from 50 to 200 microns, the worm relies on the elasticity and corrugated shape of its papillae. These features lower the threshold for tube-shaking fluid velocity.

By identifying the features of the anatomy and material structure that enable the velvet worm to produce wide-spraying jets, the researchers have characterized a new type of flexible microfluidic system that they said could be used to produce fine droplets of liquid or fibrous nets, or to mix together several substances in laboratory or industrial settings.

“After watching the David Attenborough film ‘Life in the Undergrowth’ with some high-speed footage of the worm’s slime jet, I suggested that an elastic-hydrodynamic instability of the nozzle could be a simpler solution to creating a chaotic jet, rather than muscle control,” said co-author L. Mahadevan, the Lola England de Valpine Professor of Applied Mathematics at SEAS and a professor of organismic and evolutionary biology and of physics in the Faculty of Arts and Sciences. “Our work shows that this is indeed the case, and chalks up one more example of how evolution has co-opted a simple physical principle for a behavioral response.”

The unusual velvet worms present a host of new questions for future research.

“There are many cool properties of the glue that we need to explore,” Concha said. “If you put your fingers close to the mouth of the worm and you get some glue on your fingers, you wait seven seconds and you’re stuck. So one ambition is to be able to generate a synthetic glue like that, with biotechnological applications. I think there is some chemistry that we have to learn from the worm.”

“That’s a great biological question,” Concha said. “By experience, we know that it works for all of these worms. Now, how they adapt the materials and the inner diameter of the hole inside the papillae, I don’t know. It’s very impressive. Even for babies, it works. You have a gigantic worm that’s eight or nine inches long and the baby is one inch, and already the mechanism is working.”

“Archer fish throw a jet of water, and it just follows a parabolic trajectory. Spitting cobras actively move their head to spray the poor fellow who is in front. And there are other cases — for example, spitting spiders — where the mechanism is unclear,” Concha said.

As it happens, such apt, if venomous, study subjects are close to home in Chile.

“Some biologists have posed the question, is this elasticity or is there any active mechanism? From what is in the literature up to now, I don’t have an answer, so spitting spiders are a nice thing to look forward to.”