Karen Moore to lead Board of Overseers 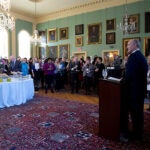 Karen Nelson Moore ’70, J.D. ’73, a judge on the U.S. Court of Appeals for the Sixth Circuit, has been named president of Harvard University’s Board of Overseers for 2015-16.

Diana Nelson ’84, chair of the board of Carlson, a leading global travel and hospitality company, will serve as vice chair of the Overseers executive committee.

“Karen Moore and Diana Nelson are both remarkably thoughtful, insightful, and dedicated Overseers, and it will be a privilege to work with them even more closely next year,” said President Drew Faust. “We are fortunate to have two such accomplished and devoted alumnae to lead the board.”

Moore and Nelson were both elected to the Board of Overseers in 2010 and will assume their leadership roles for the final year of their six-year terms. They will succeed Morgan Chu, J.D. ’76, an intellectual property lawyer and partner at Irell & Manella in Los Angeles, and Walter Clair ’77, M.D. ’81, M.P.H. ’85, medical director of cardiac electrophysiology and associate professor of medicine at Vanderbilt University Medical Center in Nashville.

Based in Cleveland, Moore has served on the U.S. Court of Appeals for the Sixth Circuit since 1995, following her nomination by President Bill Clinton.

After graduating from Radcliffe in 1970 and Harvard Law School in 1973, she clerked for Judge Malcolm R. Wilkey of the U.S. Court of Appeals for the District of Columbia Circuit, then for Justice Harry A. Blackmun of the U.S. Supreme Court.

She went on to practice law with the firm Jones, Day, Reavis & Pogue in Cleveland before embarking on an academic career at Case Western Reserve University School of Law. She served on the Case Western law faculty from 1977 to 1995, becoming a full professor in 1982. An expert in federal procedure and federal income taxation, she received the distinguished teacher award from Case Western’s Law Alumni Association (1990) and was named teacher of the year by Case Western’s Student Bar Association (1988).

Moore was elected to the American Law Institute in 1984. Before becoming a judge, she chaired several committees of the Association of American Law Schools, served as a trustee of the Cleveland Bar Association, and was elected a master bencher of the Judge Anthony J. Celebrezze Inn of Court.

Diana Nelson, who lives in San Francisco, is chair of the board of directors of Carlson, a Minneapolis-based company whose interests encompass more than 1,350 hotels worldwide as well as a global business travel management company. She became chair in 2013 after a decade of service on the company’s board.

Raised in Minnesota, Nelson is a 1984 graduate of Harvard College and holds an M.B.A. from Northwestern University’s Kellogg School of Management. Her early career included positions at Ogilvy & Mather and American Express Travel Related Services, as well as work as an independent marketing consultant.

Widely active in the governance of both nonprofit and for-profit institutions, Nelson is vice chair of the board of the San Francisco Museum of Modern Art and a member of the boards of the World Childhood Foundation and the Carlson Family Foundation. She is on the advisory board of Prime Group, a San Francisco-based real estate investment company, and the board of governors of Carlson Holdings, Inc. A committed advocate for education reform, she has been closely involved with both Teach for America and the KIPP (Knowledge Is Power Program) network of charter schools.

As a Harvard Overseer, Nelson serves as co-chair of the governing boards’ joint committee on alumni affairs and development. She has also been a leading member of the executive committee and the standing committees on humanities and arts and on finance, administration, and management, besides serving on the visiting committees for the Art Museums, the College, and the Graduate School of Education.

Long active as an alumna of the College class of 1984, she has co-chaired her class’ 10th, 15th, 20th, and 25th reunions. She is also co-chair of The Harvard Campaign, a member of the Committee on University Resources, past co-chair of the Harvard College Fund, and past chair of the Faculty of Arts and Sciences’ task force on women and leadership.