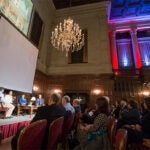 Learning on the fly

The Harvard men’s hockey team came into this year’s Beanpot Tournament with high hopes, having beaten two of their possible opponents, top 10-ranked Boston College and Boston University, earlier in the season. When Harvard and BU played on Feb. 3, the game was one for the ages.

The Crimson were up 3-1 midway through the second period, looking like a good bet to upset the then-No. 2 team in the country. But BU scored twice more in the second to pull even, with neither side able to find the net again in regulation. It was on to overtime, with a blank first period. Then, two minutes into the second overtime, BU’s Danny O’Regan, brother of Harvard forward Tommy O’Regan, scored the winner.

The Crimson had played well, especially goalie Steve Michalek, who set a Harvard and Beanpot record with 63 saves. Two weeks later, the Crimson lost again in overtime, this time 3-2 to BC.

The women’s team has been on a tear all season. Currently ranked No. 4 nationally, it beat Yale twice last weekend to clinch a spot in the ECAC semifinals this weekend. In the first game, Miye D’Oench and Sydney Daniels scored for the Crimson as they won, 2-1. It was Daniels’ sixth game-winning goal of the season. Emerance Maschmeyer was solid in goal with 22 saves, half of them coming in a hectic final period.

The following night, the teams played again, the format being a best-of-three series. This time the Crimson upped their game even more, shutting out their rivals 3-0 on the strength of Maschmeyer’s 24 saves. Sami Reber, Josephine Pucci, and Daniels scored for Harvard. Daniels again scored the game-winner.

The Harvard men will host Brown, the 11th seed, in a best-of-three ECAC series beginning Friday at 7 p.m. Game two will be played Saturday at the same time, as well as game three on Sunday, if necessary. The Harvard women face No. 3-seeded Quinnipiac on Saturday, with a chance to make the ECAC Championship Game the following day in Potsdam, N.Y.