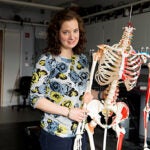 Consumption of fruits and vegetables increases as meals improve

School collaborations with a professionally trained chef to improve the taste of healthy meals significantly increased students’ consumption of fruits and vegetables, according to a new study led by researchers from Harvard T.H. Chan School of Public Health. The study also found that using “choice architecture” — environmental nudges to promote healthy choices — in school cafeterias improved students’ selection of fruits and vegetables, but did not increase consumption over the long term.

The study is the first to examine the long-term impact of choice architecture and chef-enhanced meals on selection and consumption of healthier foods in school cafeterias.

“The results highlight the importance of focusing on the palatability of school meals. Partnerships with chefs can lead to substantial improvements in the quality of school meals and can be an economically feasible option for schools,” said lead author Juliana Cohen, research fellow in the Department of Nutrition at Harvard Chan School. “Additionally, this study shows that schools should not abandon healthier foods if they are initially met with resistance by students.”

The study was published online in JAMA Pediatrics today.

Some 32 million U.S youngsters eat school meals every day; for many low-income students, up to half their daily calories come from school meals. More than 15,000 U.S. schools have implemented choice architecture methods that employ techniques such as placing healthy options at the beginning of a buffet line, or white milk in front of sugar-sweetened varieties.

The researchers conducted a school-based, randomized clinical trial during the 2011-2012 school year in 14 elementary and middle schools in two urban, low-income school districts in Massachusetts. Included in the study were 2,638 students in grades three through eight. The schools were randomly assigned so that some received weekly training and recipe design from a professionally trained chef; some received choice architecture techniques (referred to as “smart café”); some received both; and the rest (control schools) received no intervention.

After three months, students at schools that received chef intervention selected 8 percent more vegetables than students at the control schools. After seven months, students in the chef-intervention schools were 20 percent likelier than those in control school students to choose a fruit, and 30 percent likelier to choose a vegetable. Their consumption of these foods — meaning how much was actually eaten — increased by similar percentages.

After four months, smart café students increased their vegetable selection over control students by about 17 percent and fruit selection by 3 percent, but consumption did not improve. There was no significant change in selection or consumption of white milk over chocolate milk. The schools that received both smart café and chef intervention fared only modestly better than the schools with chef alone.

“Our study was not testing whether a local celebrity chef was good for the school lunch program. Our goal was to have a chef who could work with the whole school district to train personnel and to design more palatable recipes without increasing the cost of the meal. It was a great success and really illustrated that through persistence, school-aged children can learn to like healthy whole grains, fruits, and vegetables, especially if they taste good. In the end, the quality and taste of the food was much more impactful on consumption than were the effects of choice architecture,” said senior author Eric Rimm, professor in the Departments of Epidemiology and Nutrition at Harvard Chan School.

“Schools should therefore put more effort into improving the palatability of school meals for the biggest impact on students’ diets. Additionally, schools may want to consider policies that eliminate chocolate milk, as choice architecture was not an effective strategy to improve white-milk selection.”

This study was co-funded by a grant from Project Bread and the Arbella Insurance Foundation.

Chef-enhanced recipes are included in the book “Let’s Cook Healthy School Meals,” which can be downloaded.