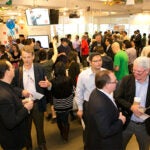 Legendary Harvard Business School (HBS) Professor Walter J. Salmon, M.B.A. ’54, D.B.A. ’60, long one of the world’s leading experts on retailing, retail distribution, and marketing, died on March 8 at Beth Israel Deaconess Medical Center in Boston from complications of a stroke. He was 84. At the time of his death, he was the School’s Stanley Roth Sr. Professor of Retailing Emeritus.

For more than 40 years Salmon influenced thousands of students, executives, and other academics through his broad-based research, exceptional teaching, and unsurpassed knowledge of retail stores and consumers’ relationship with them.

“Walter was a legend in our field. His knowledge was extensive, and his intuition was precise and always on the mark. It was not surprising that he served on the boards of many retail companies, and that his advice was much sought-after. I do not know of any academic who was revered as much by the retail industry,” observed HBS Professor Rajiv Lal, an authority on retailing who now holds the Roth chair.

“For me personally, he was a mentor, colleague, and dear friend, without whose presence my career at HBS would not be as fulfilling. All that having been said, what I admired most about Walter was that he was the most wonderful human being I have known. He was a man of great compassion and kindness, who took great joy in helping whoever he could, however he could. We will all miss him greatly.”