Harvard comes up one shot short 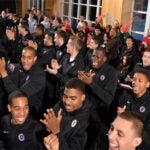 JACKSONVILLE, Fla. —  On a day full of upsets the 13th-seeded Harvard men’s basketball team seemed destined to knock off fourth-seeded North Carolina Thursday night, but Wesley Saunders 3-pointer at the buzzer was off the mark as the Tar Heels held off for a 67-65 victory.

Saunders led all scorers and set a Harvard record for points in a tournament game with 26. The senior finished 8-of-14 from the floor, 2-of-3 from 3 and 8-of-9 from the line, and added four rebounds, five assists and two steals.

North Carolina (25-11) controlled the paint for much of the game, outscoring Harvard (22-8) 36-22 down low and holding a 35-26 advantage on the glass. Marcus Paige scored 12 points and dished out six assists to pace the Tar Heel offense and Justin Jackson chipped in 14 points.

With the win, North Carolina advances to the NCAA tournament third round where it will meet the winner of Thursday’s match-up between fifth-seeded Arkansas and 12th-seeded Wofford. The game will be played Saturday with the tip off time yet to be announced.

The Harvard men’s basketball team held the lead with 1:15 to play and looked destined for a third-straight victory in the NCAA tournament’s second round, but in a day full of upsets Harvard could not.