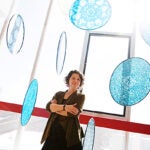 The boxy mail truck familiar on American roads for more than two decades soon may be a thing of the past. The Postal Service is beginning the process of replacing some 180,000 of the trucks, a significant portion of its total fleet.

The request for proposals sent to automakers in January carried several design considerations, including enhanced fuel efficiency, lower emissions, and enough space to allow workers to stand up in the back as they grab letters and boxes for delivery.

The Gazette asked Henry Lee, an authority on electric cars and the Jassim M. Jaidah Family Director of the Environment and Natural Resources Program at the Belfer Center, about the opportunity for the Postal Service to improve its environmental footprint — and perhaps spark broader automotive changes — through a more fuel-efficient replacement for the current model, which gets roughly 9 miles per gallon.

GAZETTE: How important should fuel efficiency be to the Postal Service’s consideration of a new vehicle?

LEE: That’s a tough question to answer. From the perspective of someone concerned about the environment, they should be quite concerned. But if I was [head] of the Postal Service, I might say, “If society cares about this issue, they’ll put a price on carbon and that will change my thinking about what I’m going to buy. But if they won’t do it, why should the people who buy mail services and a company that’s multiple billions of dollars in the red pay more for something that government hasn’t told us it cares about?”

LEE: I haven’t done the numbers, but you have to ask how many miles postal workers travel in a day. Not many, though they travel a long time and they keep the engine idling. They probably travel more in a day than they would be able to if this was an electric car. They’d probably run out of electricity. I haven’t done the analysis, but what if you went to natural gas? Or hydrogen? Certainly natural gas would be an option.

GAZETTE: Not electricity, though, because of the number of hours they’re on the road?

The good news for electric vehicles is that they would all go back to the same garage in the evening, and you could put charging facilities in the garage quite easily. So charging won’t be a problem, which it might be if you or I bought the car. But you’d have to figure that it needs more batteries than a normal car. You really don’t want the vehicle to have to come back at noon to be recharged.

So you’re going to need more batteries in each vehicle so you have longer range. A Tesla has a phenomenal number of batteries. But it can go for 240 miles.

GAZETTE: Do you have a sense of what an ideal mail vehicle would look like?

LEE: No. It’s an interesting problem. If I had two weeks free, I bet I could come up with some ideas. I can tell you what won’t work, but I can’t tell you what the answer is. I can certainly beat 9 miles per gallon, though. The question is: Do I want to beat it by a factor of two or a factor of three?

GAZETTE: If the media coverage is correct and the Postal Service is going to replace 180,000 vehicles, is that big enough to make an impact on the tailpipe pollution that the country emits?

LEE: Yes and no. The no is because you have these vehicles dispersed across the entire country, so that’s not going to make a big dent [in local air quality]. Where it can make a dent is if you are now manufacturing engines that are a lot more efficient for midsize and small-size trucks — small trucks and SUVs are what Americans buy these days. And if you can improve the efficiency of truck engines, particularly small trucks, that would have a major impact.

If I build an engine that is more efficient and I have to buy equipment and parts, somebody has to manufacture all those parts. They would probably like to sell some parts to customers beyond the U.S. Postal Service, so the impact of the improvement becomes wider. It’s like when an elite car model has some [advanced] device, and the next two years more cars have it and, after 10 years, all cars have it. So the more we can build more efficient vehicles, the better off we’re going to be and the better off the world’s going to be.

GAZETTE: Where do vehicle emissions rank in the list of climate change challenges?

LEE: Again, a simple answer is hard here. If you forget climate for one second, smog is a huge problem in cities like New Delhi and many others in China. Smog is a chemical soup that consists of a number of chemicals, including small particles. A lot of these particles and a lot of the NOX [nitrogen oxides] are emitted by vehicles, particularly older trucks.

So if I can either substitute much more efficient models or get those trucks off the road, I’m going to make a dent in conventional pollution. I was just amazed at the number of trucks I’ve seen in China. I haven’t spent time in India, but I would suspect it’s not much different.

Second, as I ratchet down emissions of power plants — there’s the new Obama [power plant] rule and I suspect the Chinese are going to do the same thing when they come up with their cap-and-trade program — then those sources I’m not ratcheting down will contribute a higher percentage of the total CO2 emissions. People may say that we can get everything we need [in emissions reductions] now from power plants, but that’s not going to be the case 10 years from now, or 20 years from now, or 30 years from now. So if you want to make a difference in the out years, if you want to meet the 50 percent, 60 percent, 70-80 percent goals that the politicians are talking about, you have to address transportation.

I’ve done a lot of work on electric cars, and I’ve done some work on Chinese electric cars and at first blush they look like a monumental failure. They were trying to build cars to compete with Toyota and Tesla, but there are a couple of small, private entrepreneurs who are saying, “We have a pretty good monopoly on electric bikes, why don’t we produce small electric cars that cost $5,000 and go 35 miles an hour and maybe can’t even be used on the highway?”

So they started making them and, lo and behold, they sold 400,000 of them last year. In fact, they sold 200,000 in one province. That’s five times what they sold in [larger] electric cars, so maybe they’re onto something here. These cars’ costs are at most $5,000 to $10,000. And somebody’s going to come along and say maybe there’s a niche here at $20,000 or $15,000 or $18,000 for a better electric car. That doesn’t solve the transportation emission problem, but with 800 million households in China, it can really make a dent. And these cheap electric vehicles might just be what India needs.

Our focus is on the Tesla and these fancy $75,000-$80,000 cars, which are great cars. But maybe the answer for the world is these small and slow electric vehicles.