Ebola: A long way from over 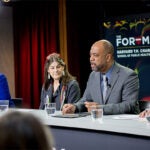 Though this epidemic is waning, the conditions that fostered it remain, so it can strike again

The worst days of the Ebola epidemic appear to be past, but authorities speaking at Harvard warned Thursday against any sense of “triumphalism” until the last patient is healed and health system improvements are in place to prevent recurrences.

The experts on the disease and the campaign to fight it, both in West Africa and in the United States, reflected on lessons that were hard-won over the past year, during which 23,000 people were infected, mostly in three West African nations, and nearly 10,000 died.

A key lesson, according to Marshall Lyon, a physician at Emory University Hospital, where four U.S. Ebola patients were treated, is that defeating the disease is medically straightforward: provide supportive care as the patient’s body fights off the virus.

While that prescription is pretty simple, Lyon said that doesn’t mean it is easy. The disease wracks patients with horrific bouts of vomiting and diarrhea — one patient lost 10 kilograms (about 22 pounds) of body weight in one night — that require oral rehydration, if they can keep fluids down, or intravenous rehydration, if they cannot.

Even with rehydration, patients aren’t out of the woods. The fluid loss upsets their bodies’ normal balance of electrolytes, so hospitals have to check those balances and ensure they’re restored properly. One patient had diluted potassium levels, which created cardiac arrhythmia. In addition, the disease also can cause organ failure, and some patients spent time on dialysis machines or ventilators while their kidneys or lungs recovered.

“There is nothing magic about taking care of these patients. It’s supportive care,” Lyon said. “It’s not rocket science … but it is demanding and took a lot of effort.”

The access to modern medical facilities in the United States means that the fatality rate for the few cases here has been far lower than in West Africa, leading some observers to question just how inherently deadly the disease is — or ought to be. Paul Farmer, Harvard’s Kolokotrones University Professor of Global Health and Social Medicine, pinned the epidemic’s deaths not so much on the disease as on the region’s failed health care systems.

“The majority of people who die of Ebola won’t die of Ebola, they die because they don’t have a health care system,” said Farmer, who, through the nonprofit he heads, Partners In Health, is working to improve such systems in two of the afflicted nations, Liberia and Sierra Leone.

Lyon and Farmer made their comments at an all-day conference on the Ebola epidemic and the responses to it at Harvard Medical School’s (HMS) New Research Building. The conference, organized by the HMS Department of Microbiology and Immunobiology, attracted an audience of several hundred to the Joseph B. Martin Conference Center.

The event took place as positive signs in treating the epidemic continued to emerge. Liberia reported no new cases during the week of March 1 for the first time since May 2014, though 132 new cases were reported that week in Sierra Leone and Guinea.

The session was introduced by HMS Dean Jeffrey Flier and John Mekalanos, the Adele Lehman Professor of Microbiology and Molecular Genetics and chair of the HMS Department of Microbiology and Immunobiology. Mekalanos said although the event was focused on Ebola, the issues it addressed were applicable in other medical settings.

“The issues here are really quite broad,” Mekalanos said, adding that old threats from ailments such as HIV, tuberculosis, pertussis, and measles haven’t gone away, even as threats like MERS (Middle East Respiratory Syndrome), multidrug-resistant superbugs, and deadly strains of influenza emerge. In addition, the speed and ease of global travel means that an ailment in a region that seems remote one day can be on your doorstep the next.

“It really reminds us how we don’t know where the evolutionary race between microbes and our immune system will lead us,” Mekalanos said.

Mekalanos and Jens Kuhn, lead virologist at the National Institute of Allergy and Infectious Diseases and an expert on filoviruses, the family of viruses to which Ebola belongs, called for more basic research, saying that too much remains unknown about Ebola.

Kuhn said that though much has been written during the recent outbreak, most of the information is not useful scientifically, since it’s heavy on anecdote and light on scientific rigor. For example, he said, though fruit bats have been fingered as a likely animal reservoir for the disease, that contention is based on the fact that some bats had antibodies for it, which could simply mean that they had been exposed to it, not that they serve as a natural reservoir.

“I would say we can say bats are most likely exposed, but whether they’re the host is unclear,” Kuhn said, adding that other animals are also possible hosts, including the bush pig, the blue duiker, the central chimpanzee, and the lowland gorilla. “There are many gaps that need to be filled. … We don’t know anything about the ecology of this virus.”

Another concern, he said, is that most of the scientific work that has been done has been limited to a single strain — there are five species of Ebola — and the assumption that the results can be generalized to the others could turn out to be untrue.

Kuhn questioned whether public campaigns against eating bushmeat — wild animals caught for food — are warranted, since the evidence that infection comes from bushmeat is weak, and the meat provides an important source of protein.

Farmer, whose Partners In Health organization has rapidly expanded since arriving in the region several months ago, agreed, saying that nutrition continues to be an important factor in the health of people there. That factor, he said, along with basic medical care, are important keys to fighting Ebola.

Farmer said the difference in death rates between those who get Ebola treatment in the West and those treated in West Africa shows what is really going on in fighting the disease: People who can get the proper supportive care have a much greater chance of living, meaning that the core issue really is one of ensuring that high-quality care is available everywhere.

“The majority of people who have received early aggressive care have survived. That means most people never receive aggressive care,” Farmer said. “Ebola triumphalism is just not true.”

Farmer said the most “fatal strain” in Ebola is the “low aspirations that we have for medical care for people living in poverty.” He called those “the poison that we have to work against.”

Anthony Fauci, director of the National Institute of Allergy and Infectious Disease, who participated in the discussion by video connection, pointed out that with properly functioning health care systems, the number of patients to be treated would be far less, because early detection, contact tracing, isolation, and other steps could help stop an epidemic early.

When asked what the medical community can do to further the fight against Ebola, Fauci said it’s important to emphasize that health is not local any longer.

“We have a moral responsibility to address global health,” Fauci said.