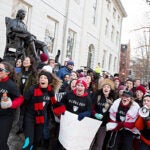 Jonathan Haber earned his bachelor’s degree, in chemistry, from Wesleyan University in 1985. Nearly three decades later, he decided to earn another bachelor’s, this one in philosophy.

He also resolved to complete his studies in just one year, entirely online, for free.

Haber documented those 12 months on the website Degree of Freedom, detailing his experience completing the equivalent of a bachelor’s degree using Massive Open Online Courses, or MOOCs, and other forms of free learning. As the inaugural HarvardX Visiting Fellow, Haber recently spoke at the Harvard Ed Portal about what he had learned during his year of intense online study. Appropriately, in addition to nearly three-dozen Ed Portal visitors, more than 80 people watched the talk online.

“MOOCS are an experiment in teaching and learning, of what might happen if Harvard, MIT, and other universities all put their best courses online for the whole world, for free,” Haber said. “There’s an experimental nature to MOOCs and to the MOOC culture. It’s a culture where classics professors are sitting down with video producers and computer programmers to turn out really quite remarkable courses.”

One of the things he experienced was “a bit of academic culture shock,” Haber said. “You’ve got courses that might once have been considered proprietary by a university, now considered a public good to be shared.” Another discovery was the rise of “rock-star professors — professors who love to teach, and who are becoming famous and well-known for teaching thousands of people.”

Haber drew courses from an assortment of online learning sources. In his online postings, he showed work completed through sites such as edX, coursera, and Udacity.

From January to June, his “freshman and sophomore” months, Haber took courses such as “Think Again: How to Reason and Argue.” From July through December, he advanced to “junior and senior” courses, such as “Mathematical Philosophy” and studying Kierkegaard. For his senior thesis, Haber wrote a book titled “MOOCS: The Essential Guide,” published by MIT Press last year.

While Haber conceded that MOOCs have their problems — including overcrowded discussion forums and questionable value in the marketplace — he rejected the idea of online learning as “recreational education.” To make his point, Haber asked his audience how they would feel if he suddenly gave them an exam from their college days, prompting a swell of nervous laughter.

In introducing Haber, the first HarvardX for Allston speaker for the semester, Robert Lue, faculty director of HarvardX and the Ed Portal, and professor of the practice of molecular and cellular biology, posed some challenging questions to the audience.

“What can we actually do with all the information that’s available online nowadays? Can it make a difference?” he asked.

Lue said Haber “came to national prominence” when he began the Degree of Freedom project, and has continued exploring “questions of meaningful assessment of online abundance” during his HarvardX Visiting Fellowship.

Responding to Haber’s remarks, audience member Joyce Antler said she was struck by the many opportunities and challenges MOOCs pose to students and universities.

“This was a sophisticated and interesting talk,” she said. “It’s impressive to realize how many people have participated in online learning. This was a terrific event, and I hope there are many more of them.”