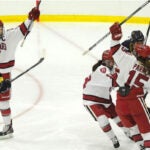 PHILADELPHIA – The Harvard men’s basketball team is going dancing again after defeating Yale Saturday afternoon, 53-51, in a one-game playoff at The Palestra to decide the Ivy League’s automatic bid to the NCAA tournament.

With the scored tied 51-51 and the shot clock winding down, Wesley Saunders spun around his defender into the lane, and appeared to be poised to take the game-winning shot. The senior guard stopped, however, and turned over his right shoulder, feeding classmate Steve Moundou-Missi who swished his shot from the top of the key for the 53-51 lead with nine seconds remaining.

Needing to make one final stop, the Ancient Eight’s best defense turned to the newly minted defensive player of the year, Moundou-Missi, who attempted to draw a charge on Javier Duren and altered the shot just enough. A few bounces later the buzzer sounded, and the court was flooded with Harvard fans celebrating the team’s fourth straight trip to the NCAA tournament.