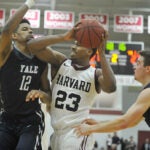 Harvard will face Yale in playoff game on March 14

The Harvard men’s basketball team did its part with a 72-62 win over Brown Saturday night at Lavietes Pavilion and Dartmouth returned the favor, upsetting Yale 59-58 to give the Crimson a share of the Ivy League championship and force a one-game playoff to decide the Ancient Eight’s bid to the NCAA tournament.

The playoff game will be held at the Palestra in Philadelphia on March 14. Game time has not yet been announced.

By clinching a share of its fifth-straight Ivy title, the Crimson becomes the first Ancient Eight team to win that many crowns consecutively since Penn between 1978-82.

For the full story, visit the Harvard Athletics website.