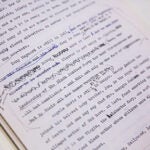 A close glimpse of James Baldwin

It’s instructive that the first person Steven Pinker, the noted psycholinguist and cognitive scientist, mentions in the acknowledgments page of his latest book, “The Sense of Style: The Thinking Person’s Guide to Writing in the 21st Century,” is his longtime copy editor. A copy editor’s stock in trade — grammar, syntax, punctuation, and usage, along with the consistent application of their related rules, or what might be called style — makes up a large part of Pinker’s book, his 10th, which was published last year.

Pinker readily admits to an ardor for style guides, Strunk and White’s “The Elements of Style” being an early and amusing example for readers who appreciate the genre. Speaking in his office at William James Hall at Harvard, where he is the Johnstone Family Professor in the Department of Psychology, Pinker said he wrote the book because “when it comes to usage, there’s no one in charge; the lunatics are running the asylum.”

As he explains it, specific guidelines, like using “that” to introduce restrictive relative clauses and “which” to introduce nonrestrictive ones, originated as rules of thumb to help people get out of “the misery of indecision.” Over time they were uncomprehendingly copied until one solution became objectively correct and another objectively incorrect. Publications and news agencies, as well as book houses and entire disciplines, adopt their own recommendations within these conventions: serial comma, or not? Capitalize continent when it means Europe? (The New York Times does.) In the “The Chicago Manual of Style,’’ that 1,000-page tome that lends spine to many a style sheet, the grammar and usage section alone goes on for 446 pages.

In “The Sense of Style,’’ Pinker, who is also the chair of the usage panel of the American Heritage Dictionary of the English Language, takes a modern linguistics approach to contentious usage problems. For example, the “singular they,” often faulted as breaching the rules of logic, he said, carries with it a sense of “they” that is not plural; it’s generic (or a “bound variable,” to be precise).

“The meaning of ‘they’ is X,” he said. “That’s why it’s so indispensable and why it’s so hard to avoid in conversation. ‘Everyone returned to their seats.’ For all X, X returned to X’s seats.”

Likewise, contorting a sentence to avoid its ending in a preposition is misguided in the extreme, and the rule against it “completely invented,” said Pinker, who also defends the “unfairly maligned passive voice.”

“If there’s any message from the usage chapter of this book,” he said, “it is that matters of usage are subject to criticism and analysis and evaluation. They’re not like consulting the rulebook of chess or Major League Baseball. But many issues of usage involve conflicting desiderata. Often the English language provides no perfectly acceptable way to express an idea, so a writer has to decide what trade-off — here we go — he or she makes, or they make, etc.”

The subtitle of the book, he added, speaks to the “assertion that these issues are worthy of thought and discussion.”

As for achieving deft, graceful, and clear use of the language — style in the stylish sense of the word — it helps to know what underlies the bureaucratese, academese, professionalese, and other such afflictions that Pinker’s readers might be seeking to improve upon, and he identifies a handful of causes. The first is what he calls the curse of knowledge, in which “it’s extraordinarily difficult to know what it’s like not to know” something that we have learned.

Related to this, he added, is a lack of empathy, a blind spot for the “misery of the reader,” which can be especially challenging in teaching. (Pinker has received four teaching awards and been named among Harvard students’ favorite professors six times.) Experts, he said, need to try to “put themselves in a time machine and think back to what it was like before they themselves knew the subject matter.”

A further hazard comes with entry into the guild, he said: “When you become an expert in a field, you think about its content more abstractly,” while novices must learn at the level of concrete detail. To someone studying gene expression, for example, a mouse may be more a model than it is a mouse. Yet faced with the term murine model, “your poor reader may not realize you’re talking about Mickey and his fellow rodents.”

Thus, while the work of undergraduates is “mostly pretty good,” he said, it’s often not the case with graduate students, for whom “it’s easy to miscalibrate how common a particular set of jargon terms is outside of the specialty.”

Since writing is hard, he went on, “unless you specifically address the problem of making your prose clearer you won’t be very good at it. It’s a separate stage in the writing process from getting your ideas down on paper or hard disk or the cloud.”

And because the order in which thoughts are most easily absorbed by a reader is not the order in which they occur to the writer, hear this about presenting new material: Set up the problem and then introduce the discovery that solves it, Pinker says, rather than starting with the most interesting part to you and then scrambling to explain why it’s interesting.

“Putting ideas down on the page in the order in which they occur to you is a recipe for bad writing.”