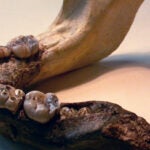 A protein that is necessary for the formation of the vertebrate brain has been identified by researchers at the Harvard Stem Cell Institute (HSCI) and Boston Children’s Hospital, in collaboration with scientists from Oxford and Rio de Janeiro.

The researchers say the finding, which has been successfully demonstrated in frog embryos, will help scientists control differentiation of various cell types.

Their study was given early online Thursday and is being published in print in the March 23 issue of the journal Developmental Cell. Xinjun Zhang and Seong-Moon Cheong, both postdoctoral fellows in the laboratory of HSCI-affiliated faculty member Xi He at Boston Children’s Hospital, are co-first authors.

The protein, Notum, first discovered in fruit flies in 2002 and then found in mice and humans, is one of many that help determine embryonic development. For some time, researchers have known that Notum regulates wing formation in flies. But until recently, it was not known how Notum affected vertebrate embryo development. In collaboration with researchers from University of Oxford and Federal University of Rio de Janeiro, He and colleagues compared how frog embryos — which are considered models for human embryos — developed with and without Notum.

When the researchers injected frog embryos with Notum, the embryos grew bigger brains and heads. When Notum was not present, the embryos would become a sack of skin cells with no head and a tiny brain, a result of embryonic progenitor cells making only epidermal but not neural cells.

Simply put, said He, “The frog brain cannot be properly formed without Notum.”

These findings could benefit stem cell researchers trying to create specific tissue types or organs in the lab. In order to guide or direct stem cells to differentiate into a given cell type, such as neural cells or muscle cells, researchers continue to alter their experimental recipes, fine-tuning which molecules should be added to their dishes in what sequence and amount.

For those trying to create neural cells, “Notum is a necessary ingredient and new tool in the kit box for researchers to instruct human progenitor cells to become neural tissues,” said He, who is also an American Cancer Society research professor.

Additionally, the researchers were able to demonstrate how Notum deactivates Wnt, which is a family of proteins that direct stem cells to “self-renew,” or make more stem cells, among other things. If left unchecked, Wnt could cause certain types of cancer, such as gastrointestinal, brain, and blood cancers.

The study builds on previous work by HSCI Co-Director Doug Melton, who early in his career did groundbreaking research on the development of the frog nervous system.