A celebration in Beijing 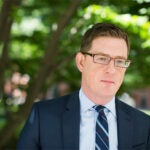 BEIJING — A few miles from the Forbidden City, the center of Imperial Chinese power for nearly 500 years, Harvard President Drew Faust joined more than 430 alumni, faculty, and friends on Sunday to celebrate the University’s long and growing ties to the Middle Kingdom.

The gathering was the latest in a series of Your Harvard events across America and around the globe, organized by the Harvard Alumni Association (HAA) to engage graduates in the future of the University. From Mexico City to London, from Seattle and Los Angeles to Dallas and New York, Harvard alumni have been meeting to discuss the University’s impact in the world.

The Beijing event was hosted by the Harvard Clubs of Beijing, Hong Kong, and Shanghai. HAA President Cynthia Torres opened the evening, which was also attended by Dean Julio Frenk of the Harvard T.H. Chan School of Public Health and Dean Mohsen Mostafavi of the Harvard Graduate School of Design (GSD).

In her keynote address, Faust argued that the University’s future success will be based on five key strategies, including harnessing the power of “One Harvard” to advance discovery and learning; attracting and supporting the most talented faculty and students; supporting new approaches to learning and teaching; and creating a campus for the next century.

More importantly, she said, Harvard must “exemplify the centrality of meaning, values, and creativity in the mission of the research university.”

“Our ability to grow in knowledge and in wisdom — to progress as individuals and as a society — depends on the sciences and the arts, the practical and the transcendent, the measurable and the immeasurable,” Faust said, noting that the third-most-popular class among undergraduates (after introductory computer science and introductory economics) is “Classical Chinese Ethical and Political Theory,” with an enrollment of nearly 700 last semester. “This is the heart of all of our research and teaching: the necessity for interpretation and for judgment, for making meaning and making sense out of the world around us.

“Technology has rendered this effort ever more challenging, as we are bombarded with information that we seek to transform into knowledge and wisdom,” she continued. “Technology offers magnificent tools, but how shall we use them? How do we know what is true? What is good? What is just? How do we nurture the imagination that kindles innovation and change? People at Harvard have asked, answered, reconsidered, and rephrased these questions for 378 years … Now it is our turn to take that Harvard and carry it forward into an impatient future,” she concluded.

Her remarks followed a panel titled “A Lens on Research: New Ways of Seeing the World,” featuring Xiaowei Zhuang, the David B. Arnold Jr. Professor of Science at the Faculty of Arts and Sciences, and Ali Malkawi, professor of architectural technology at the GSD and founding director of the Harvard Center for Green Buildings and Cities. George Yeo, M.B.A. ’85, moderated the discussion.

Zhuang’s research focuses on developing new methods for scientists to see the very small structures inside human cells, in the hope of better understanding cell biology and ultimately discovering new approaches to combatting cell-based disease. By contrast, Malkawi studies and develops models designed to improve the ways large structures — from buildings and airports to cities and infrastructure systems — operate, in an effort to make them more energy-efficient and ultimately resource-neutral.

Despite the differences between her research into the microscopic natural world and his focus on large, human-made structures and systems, they learned in preparing for the talk that their work had much in common.

“Both of us actually develop tools. Both of us work with accuracy-related issues. Both of us analyze live systems,” Malkawi said. “In my case, I analyze buildings and cities. What she does is try to unveil the mysteries of life and disease. In my case, I use algorithms to look at buildings and cities as living systems. In her case, she uses them to look at processes in cells in animals and human beings. At the end of the day, what we both are trying to do is visualize the invisible.”

“You can see two essential things,” said Zhuang, referring to the commonalities in their research. “We both develop physical tools and imaging computational algorithms.”

She offered examples of how the research conducted by one can bolster the efforts of the other, despite superficial differences.

“It is very easy to imagine, for instance, that an algorithm used to extract information from the images of these cities and buildings could also be used to find faults in a cell, to see, for instance, how a cancer cell is different than a normal cell,” she said.

This discovery of common research agendas between two Harvard faculty members from different Schools and disparate fields who had never previously met — a true “One Harvard moment,” in the words of one observer — promises to lead to new scientific breakthroughs in both areas. When the two return to Cambridge, they plan to develop a collaboration between Zhuang’s lab and Malkawi’s center to advance their research efforts.

In her address after the panel, Faust highlighted Harvard’s deep ties to China, which blossomed as early as 1869, when Ko Kun-hua was hired to teach Mandarin to undergraduates. More than 3,100 Harvard alumni call China and Hong Kong home, she noted, and more than 800 women and men from China and Hong Kong are currently studying at the University.

“This is my fourth visit to China — my second to Beijing — and it is a testament to Harvard’s ever-widening global reach that we are hosted tonight by three Harvard Clubs,” Faust said.

Instead of cataloging the many connections shared between Harvard and China, she recounted the tale of a Harvard faculty member whose life’s work exemplified the relationship.

On a visit to the Arnold Arboretum last spring, Faust recalled, she discovered a collection of beautiful black-and-white photographs of trees that had been taken by Ernest Henry Wilson, a naturalist who traveled throughout China in the early 20th century, collecting specimens and photographing landscapes on behalf of Harvard.

“Wilson was an intrepid explorer. I imagine his long passage across the Pacific, sailing to Shanghai from San Francisco before embarking on a journey that spanned three years and crisscrossed the countryside,” she said. “I imagine his efforts to haul a state-of-the-art camera — its various parts in three heavy boxes — over mountains, across rivers, and up precipices.”

Having introduced thousands of never-before-seen plants to gardens around the world and brought images of China to a global audience, Wilson is widely credited with sparking in the West an interest in Eastern Asian botany, history, and culture.

“Like so many Harvardians before and after him, Wilson had a desire to discover, to broaden the scope of knowledge,” Faust said. “He wanted to see the world and to share with others what he had seen and what he had come to understand.”

The evening concluded with a reception at which Harvard alumni had an opportunity to reunite over their shared experiences and continuing engagement with University life and learning.

The next Your Harvard event is scheduled for Chicago in May.