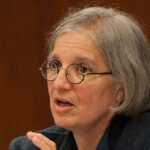 Heart disease is the leading cause of death in women in the United States, deadlier than all forms of cancer combined. To make matters worse, in women the symptoms of cardiovascular disease may present differently than in men, and both treatments and risk factors may differ as well. The good news is that up to 90 percent of heart disease may be preventable, and that research into the unique risks and treatments faced by women has begun.

Addressing the challenges that women face from this silent killer was the topic of the inaugural Dr. Lawrence H. and Roberta Cohn Forum, “Women and Heart Disease: What You Don’t Know May Kill You.” Presented in collaboration with the Huffington Post, the panel discussion was held Thursday at the Leadership Studio of the Harvard T.H. Chan School of Public Health (HSPH). It was streamed to the Web and is available for viewing.

Tightness in the chest. Pain running down the arm. These are considered classic symptoms of heart disease, and they are — in men. In women, however, symptoms may include gastrointestinal upset, shortness of breath, or “overwhelming fatigue,” said Johnson. While these symptoms may be easily dismissed, especially by busy multitaskers, they shouldn’t be, because awareness is the first line of defense against a disease that kills a woman each minute. Contact your doctor, advised Johnson, for example, for heartburn, “if you take a Tums, and it doesn’t go away.”

Many of the risk factors are different for women, as well. Although obesity, high blood pressure, and smoking all increase the chances for heart disease in women and men, women are disproportionately affected by diseases such as diabetes and certain disorders in pregnancy, such as pre-eclampsia, said Johnson. In addition, hereditary factors may play out differently in women, whose risk also goes up following menopause.

Treating these risk factors is a major first step. “Heredity is not destiny when it comes to cardiovascular disease,” said Manson. Instead, behavioral changes, including diet and even moderate exercise, can greatly reduce the risk of heart disease or stroke. Although the effects of poor diet or exercise habits increase as we age, the opposite is true as well, as small changes have even greater benefits.

“Women in their 60s or 70s, when heart disease rates go up, can really make a lot of progress in preventing heart disease and stroke by diet and by healthy lifestyle,” said Sacks. (These changes may also help prevent dementia.)

The options for a “heart-healthy” diet, he said, are many. Nor, he stressed, is this diet the same as a low-fat diet. Fried fish, for example, can be quite healthy, if fried in a polyunsaturated canola or corn oil. He recommended the DASH diet, first developed by the U.S. National Institutes of Health, which is high in fruits, vegetables, fish, and poultry, and calls for restricted intake of processed and red meat. (DASH stands for Dietary Approaches to Stop Hypertension.) And although research, he said, is still ongoing about the role of sodium, in general health professionals believe we consume too much.

Mohl noted progress in educating women and in reducing mortality in women. Citing the American Heart Association’s Go Red for Women campaign, she called for increased awareness, both in personal and public choices. “We’re trying to make the healthy choice the easy choice,” she said. “As we’re building new roads, let’s make sure we have bike paths or crosswalks, so people can walk safely” to encourage walking and biking. “Provide calorie counts, so people can eat better.”

More research into how heart disease manifests in women, the panelists agreed, is also necessary. Only recently have clinical trials included women and minorities, said Johnson. Even then, the results for these subgroups often are not broken out, which means that gender or population differences cannot be addressed.

This research must not only look into the causes and treatment of heart disease, but also into prevention. “We need much more research on how do you effect behavior change,” said Manson. “So much can be prevented, but very few women are doing this. Having funding for that type of behavioral change research — what works and what doesn’t — couldn’t be more valuable.”