With music as his muse 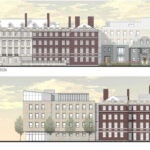 The newly renovated Barker Arts Café, brainchild of Diana Sorensen and the Humanities Project, aims to be a bohemian locus of student activity and conversation around the arts and humanities at Harvard College, and it is succeeding. Miles Hewitt, a sophomore English concentrator in Pforzheimer House, is a student musician who performed his original work at the café last Thursday evening.

Hailing from the state of Washington, Hewitt does more than just read books. He learned piano when he was 10, and now plays guitar, sings, and writes songs, often of a folk-indie inclination. As he sat with me in the dimly lit café before going on stage, he talked about performing at Starbucks in Harvard Square throughout freshmen year and with his band, The Solars. Though he finds live solo performances enjoyable, recording and building relationships with his band is Hewitt’s focus. Alongside a drummer and keyboardist from Berklee College of Music, “loud rock music with good people is absolutely the goal,” he attested with a smile.

But being a musician while simultaneously being a Harvard student isn’t always smooth sailing. “Music has always been my main love, but it’s definitely a challenge trying to integrate being a student into being a musician, and finding that balance. I feel my plans are probably pretty different from many of my peers. I admire their well-thought-out plans, but for me it’s not as clear.”

Despite that uncertainty, Hewitt has his academic side. As a student studying English, he loves “great writing,” and that shows in his music. As he bantered with the audience between songs, he brought the listeners into his writing process, saying how he drew inspiration from sources as varied as the Bible and James Joyce’s “Dubliners.” He thinks that playing music is akin to being a storyteller, and he has a special love for David Foster Wallace.

The café, which reopened with its new mission in October, has begun hosting performances like Hewitt’s, as well as readings, discussions and exhibitions under the direction of lecturer Liz Maynes-Aminzade. With events ranging from storytelling to live jazz to comedy nights, and a rustic bohemian vibe to top it off, the café is shaping up to be a popular spot for study, conversation, or a coffee break. Sorensen, dean for the Arts and Humanities and professor of Romance languages and literatures, wrote about the idea behind renovating the café: “Our goal … was to create an inviting place that really belonged to the arts and humanities community, where students and faculty members in our division could meet to talk about ideas and artistic initiatives, to work together … [and] share in two of the great pleasures of life: collegial conversation and participating in artistic and performance events.”

As Miles’ performance came to a close, I saw Sorensen’s vision becoming reality. The rotunda audience burst into applause, and Hewitt smiled in gratitude. In discussing his musical future, he was clear-sighted. “You know, it’s not a straight path, like majoring in Ec — not that there’s anything wrong with that — it’s just different,” he said. “It’s hard for me to imagine music as the main thing I do, but it will remain my biggest love, and I trust that I’ll find my own way.”

With recording, composing, and reading great literature on his mind, Hewitt left the café a little more alive for his performance. At the café, there’ll be more to come.