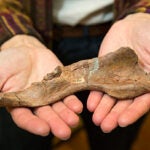 Have you ever wondered why it’s so tough to put down that last slice of bacon? Part of the answer is that humans are evolutionarily programmed to crave fatty foods, which offer the biggest bang for the buck, nutritionally speaking, with more than twice the calorie density of protein- or starch-rich food.

But a new Harvard study suggests that it’s a uniquely human practice — cooking — that allows humans to more fully access that energy.

The research was conducted by Emily Groopman ’14 as part of her senior thesis. Among mice used in the study, those that ate a diet of cooked fat-rich foods weighed, on average, significantly more than those that ate the same amount of a raw diet. The study was described in a paper in the American Journal of Physical Anthropology.

“It’s been very well established that cooking starch- and protein-rich foods does increase the available calories you can get out of them,” said Groopman, now an M.D.-Ph.D. candidate at Columbia University. “But when I began looking at the literature, no one had really examined the third major macronutrient, which is fat.

“Fat-rich foods provide more than twice the calories, per gram, than carbs or proteins. So you can imagine that, for early humans, who were often in a limited food environment, consuming more calorie-dense foods would allow them to eat less and still maintain the same weight, or eat the same amount and gain weight.”

To understand the effect of cooking on fatty foods, Groopman devised a simple experiment.

She prepared four diets of peanuts ― raw and whole, raw and blended, roasted and whole, and roasted and blended — and fed each to 20 mice over the course of several weeks. By tracking the weight, consumption, and exercise of each mouse, she was able to show that the cooked peanuts provided more energy than the raw.

“What we found was that the mice experienced similar changes in body weight, although they ate more of the raw peanuts,” Groopman said. “That meant they were able to extract more calories from the same amount of food if the peanuts were roasted than if they were raw.”

Part of the reason for the difference, she said, is related to the cellular structure of the nuts.

“Nuts provide an interesting model, not only because they have been eaten by humans and our ancestors for a very long time, but also because their cellular structure is very much a barrier to accessing the calories they contain. Peanuts are, on average, about 50 percent fat, but they have very tough cell walls, and the fat itself is stored in structures called oil bodies, which are coated with proteins called oleosins that hinder the digestive process.”

In addition to helping break down the cellulose that makes up cell walls, the heat of cooking alters the oleosins, Groopman found.

“When the nuts are raw, the oil bodies are fully covered by the proteins. But after cooking what we find is that there are just fragments of oleosins on the surface, which we hypothesize makes it far easier to get at the lipids.”

Aside from the insights it offers into the role cooking has played in allowing humans to get the most from their diets, the study hints at a potential future of food processing ― using cooking and other processes to adjust calorie content.

“Cooking … is a process that enables us to increase the calorie density of our food, so it’s almost as if you’re making calories out of nothing,” Groopman said. “Today we struggle with this paradoxical double burden of both under- and over-nutrition. But by changing how we process foods and how much we process those foods, we can potentially modulate the calories we get out of them to fit whatever energy needs a person might have. I think that’s a really exciting direction for future research.”