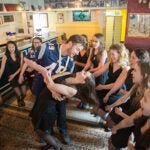 Even as Harvard digs out from recent storms, officials prepare for more

Dining services personnel are talking with vendors to move up deliveries from Friday to Thursday so there’s food on hand should the next storm — forecast as relatively minor at this point — turn into another headache.

Landscaping crews, the point people in campus snow-clearing operations, are widening pathways, driveways, and parking lots to make room for the next snow dump because, with winter just past the halfway mark, more is almost certainly on the way.

As the next storm draws near, key officials from central administration and the Schools will be on conference calls to discuss the forecast, weather-related actions of state and local government, and key logistical concerns, such as whether the MBTA will be running commuter trains, subways, and buses. All these factors are considered in any decision of whether and how the University should respond.

Executive Vice President Katie Lapp this week called the dining, operations, and other personnel who kept Harvard running through the storms “heroes,” and praised the dedication that got them to work even when noncritical staff were at home.

In addition to staff dedication, planning and coordination remain pivotal to the University’s response to unexpected disruptions, said Lapp and other Harvard administrators.

David Davidson, managing director of dining services, said that, with the responsibility of feeding some 6,000 undergraduates regardless of the weather, winter planning begins in the fall. When a forecast calls for a major storm, officials contact vendors to move up deliveries so enough food is on hand should transport be disrupted.

They also plan ahead to have staffers on hand, putting them up at local hotels, providing taxi vouchers, making sure parking spaces are cleared for those who have to drive in, and facilitating shift swaps for those who might have issues, such as having children at home, that prevent them from coming in.

For the storm earlier this week, for example, Davidson said some 80 percent of the regular dining services staff made it to work, even though public transportation was shut down except for buses. The storm’s first night, the University put up more than 50 dining services people at nearby hotels. On the second night, 45 were there, and a handful remained through the third night.

The result, he said, was three meals served a day, with just slight alterations of the menu, such as curbing cook-to-order grill operations, to free up staff.

“I’m extremely proud of the group that we have. Everybody has risen to the occasion,” Davidson said.

Paul Smith, associate manager of landscape services, said that staff dedication and planning are key to their efforts as well. For example, another five truckloads — 400 tons — of salt are on the way, enough to get the University through the winter. Staff members, meanwhile, continue to clear snow from the last storms to make way for whatever else is coming.

That work is being done by about two dozen people on the University’s regular snow-clearing crew, augmented by 20 to 30 contracted personnel who help during big storms, Smith said.

In addition to shoveling and running snow blowers, the crews use small Bobcats and the University’s two payloaders to clear snow, dumping it into 10-wheeled trucks, which transport it to a “snow dump” on Harvard-owned land in Allston, a facility also used by the city of Boston.

Smith also praised his staff members’ efforts during the past storms, saying many worked double shifts and some came in sick to help keep the paths and roads clear.

Though the physical well-being of students, faculty, and staff is paramount during weather emergencies, Harvard’s academic mission isn’t out of mind. Lapp said that Harvard’s Schools are individually figuring out how to make up missed academic work.

At Harvard College, Dean of Undergraduate Education Jay Harris has encouraged faculty and students to find times to meet outside of normal class hours, in person or virtually via conferencing applications. Make-ups can occur by extending regular classes, meeting in the evenings, or on Fridays when there are fewer regularly scheduled classes. There is also the possibility of making up class during reading period, he wrote in an email Tuesday, but officials hope not to resort to that.

Though the recent snowfall has broken several records, it hasn’t approached the region’s toughest snow year, the winter of 1995-96, when more than 100 inches fell. Smith, who was at Harvard at the time, said the snow that year was spread out over the whole season, while this year has been more intense.

“There were a lot of snowstorms [that year], not three big ones back to back to back,” Smith said.

Smith and others are hoping not to add yet another “to back” to that statement, but he is keeping an eye on the next disturbance, hoping there’s time to give the snow crews some rest.

“They’ve been doing a lot. I can’t say enough about them,” Smith said. “The guys have to get some sleep because there’s another storm Thursday.”