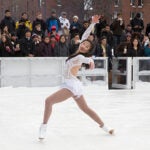 Harvard’s student comics work for their laughs, honing their talents

“Anyway, I’m Sierra. I’ve been telling jokes for some time. … I went to a pretty competitive high school. … It was really tough on the students. Everybody was kind of in competition to the point where there was one student who jumped off the third floor. … And the next week somebody jumped off the FOURTH floor.”

It is late September on Harvard’s Cambridge campus, and one of the Science Center’s large lecture halls is filled to capacity. Students lean forward, as they doubtless did in the hall earlier that day, but this time it’s not to hear an august faculty member, but junior Sierra Katow, a stand-up comic who has performed at Hollywood’s Laugh Factory and Comedy Store, and who is introducing the evening’s show.

“There’s going to be just a medley of laughter and awkward silence, and it’s going to be wonderful,” Katow says, letting the appreciative laughs fade until the quiet just touches uncomfortable, then adding, “Yeah, kind of like that,” provoking a new round of laughter.

Katow was the host for the semester’s first performance by the Harvard College Stand-up Comic Society, a relatively new addition to a campus comedy scene that gives students the opportunity to test their chops at stand-up and an array of other comedic expressions, including improv, comedy writing, cartooning, news parody, and burlesque.

While Harvard does offer a few courses on the topic — acting workshops and more academically minded examinations of comedy by Shakespeare and other playwrights — most of the action occurs outside the classroom, in student-driven extracurricular groups that have made the University something of a comedic training ground.

Some observers, including alumnus John Lithgow, have credited the bright minds and ready wits Harvard turns out with making an indelible imprint on American comedy, a style the actor once described as swinging between “ironic-brainy and daffy-stupid.”

A wide range of graduates have made their funny bones after leaving Harvard’s halls. Impresarios abound, from Fred Gwynne’s 1960s turn as television’s Herman Munster to Conan O’Brien’s late-night talk show antics to Lithgow’s own role as the leader of an alien team sent to Earth in TV’s “3rd Rock From the Sun.” Alumni impact behind the scenes is equally profound, with writers from the Harvard Lampoon, for example, graduating to some of recent decades’ best-known TV landmarks, including “The Simpsons,” “Seinfeld,” and “The Office.”

But before getting a chance to touch America’s funny bone — or any other body part — Harvard’s would-be comics have to survive the rigorous extracurricular apprenticeship that is comedy on campus.

Student comedic organizations include the well-known and ancient, like the Hasty Pudding Theatricals, whose annual burlesque dates to 1844, and the world’s second-oldest humor magazine, The Harvard Lampoon, which kicked off in 1876. They also include newer models like the news parody “On Harvard Time,” the unpredictable antics of three improv troupes, and the seven-year-old Stand-up Comic Society, whose acronym sets the off-color tone.

Students said the scene here is marked by passion as well as variety, and touched by the hardworking drive found in more traditional academic venues, like libraries and scientific labs, that, at least initially, seems out of place in comedy.

“I felt like all the students who were … interested took comedy very seriously, and when they were writing it was just as much a serious topic for them as some academic pursuit,” Katow said. “That was kind of funny because at first I was like ‘This is weird.’ I would never think I would watch ‘30 Rock’ and analyze it so closely or bring it up in some analytical way in conversation.”

Since students are at a time of life marked by introspection and change, they have lots of material on which to draw. They build jokes around kernels of truth, jotted down in notebooks and cellphone notepads, about growing up, dating, and the vicissitudes of campus life.

Alexis Wilkinson, a senior and The Harvard Lampoon’s immediate past president, said the University itself presents a ripe target, with its long tradition and serious mien crying out to be, well, lampooned.

“I think there are a lot of funny things about Harvard; it’s very mockable,” Wilkinson said. “Harvard has definitely ruined my life, but it’s also made my life in a lot of ways, and I think there’s nothing funnier than that juxtaposition. And all of us students are trying to work that out and hate it and love it at the same time. A lot of the funniness comes out of that stress, realizing the absurdity of our own situation.”

The student-run organizations give focus to campus comedy, providing both goal and form — a show, an article, a cartoon, a video, a bit — to their inspirations.

For senior Jason Hellerstein, comedy wasn’t on the radar when he arrived as a freshman. In fact, if he had been asked if Hasty Pudding Theatricals would be a good fit for him, he might have said no.

“I can’t act,” said Hellerstein, now the organization’s president. But in freshman year he picked up a form to join the tech crew, responsible for scenery and the other technical aspects of the production. “I was struck by how hilarious the application was,” Hellerstein said. “My interest in comedy kind of came out of the Pudding and not the other way around.”

Hellerstein became more and more deeply involved until this year; now, aside from classes, he does little else. As president, he oversees the club’s administrative life and daily operations, and has a hand in social events. He has been involved in workshopping the student-written script for this year’s show, “¡OOPS! … Madrid it Again,” coordinating with the professional staff who assist each year’s production and generally helping the club strike “that balance between craziness and still getting things done.”

As busy as the past few months of preparation have been, things ramp up in February and March, when the show kicks off with its infamous Woman and Man of the Year awards — Amy Poehler and Chris Pratt are this year’s recipients — and then runs seven nights a week for a month, followed by additional shows in New York and Bermuda.

Cast vice president Sam Clark said that even though students are in it for laughs, the show still is a lot of work.

“I think if we took ourselves seriously, the show wouldn’t be as funny as it is because we have to recognize at some level, that with all of the amazing costumes, professional staff, and insane talent, we’re doing a drag show with pun names and, really, the basest level of innuendo. … In terms of highbrow humor, it’s not.”

In that sense, it has a lot in common with the Lampoon, which Wilkinson described as “absurdist” and subject to the whims of each “issue editor.”

“We’re not trying to please anyone, that’s the great thing,” Wilkinson said of the magazine’s mission. “Every issue is whatever editor’s brainchild. If they want nothing but inside jokes for 80 pages, that’s 80 pages of inside jokes. … Nobody is going to stop you. You can just explore every weird comedic quirk you ever wanted to work out.”

The Lampoon also demands a significant time commitment. Wilkinson said the goal is to publish five issues per year, so as soon as one is put to bed, another opens. In addition to the magazine, the Lampoon does parodies, such as last summer’s online takeoff of the Huffington Post, the Huffington Psst, with articles bearing headlines such as “People’s Climate March Fails to Prevent Autumn,” “Dragons Overtake Liechtenstein,” and, beneath a photo of a nondescript pile, “Could this Pile of Gravel be the Next Mayor of Detroit?”

Some students manage to juggle multiple commitments. In addition to doing stand-up, Katow is a Lampoon cartoonist, serving as arts editor for the September issue. Clark, in addition to being Hasty Pudding’s cast vice president, acts with the Harvard Radcliffe Drama Club, does improv with the On Thin Ice troupe, and is a correspondent for the comedy news show “On Harvard Time.”

Begun in 2007, “On Harvard Time” is a news parody something like Jon Stewart’s “The Daily Show” and the “Weekend Update” segment of “Saturday Night Live.” Posted online, the show combines studio commentary about campus happenings with reports from correspondents. Clark, for example, has reported from the Activity Fair and, with Katow, attempted to trek to mysterious and faraway Boston. He also ventured to New Haven with a group of students to put together the annual prank video in the lead-up to the Harvard-Yale Game. Their 2013 mock Yale tour, conducted in disguise as Elis, has netted more than 1.3 million YouTube views.

With the spring term here, however, the thoughts of seniors like Clark inevitably turn to graduation, the world beyond campus, and the career choices ahead. For Clark at least, the goal is clear, even if the path may not be.

“I want to be involved in entertainment in New York,” Clark said. “I want to move to New York and try my hand at comedy, whatever that means.”