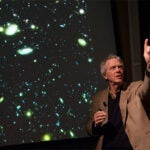 “Two factors may have combined to produce such a large applicant pool: the publicity surrounding Ken Griffin’s $150 million gift for financial aid, which came in February 2014, just as high school juniors were beginning the college search, and the Harvard College Connection, our new electronic outreach that includes a new website, video, and social media,” said William R. Fitzsimmons, dean of admissions and financial aid.

“Ken Griffin’s remarkable generosity, along with the high priority of financial aid in the ongoing capital campaign, underscores Harvard’s fundamental commitment to access and affordability,” said Sally C. Donahue, Griffin Director of Financial Aid. “A large percentage of the application increase came from those applying for financial aid.”

Close to 60 percent of Harvard students receive need-based aid, and on average their families pay only $12,000 annually. Harvard requires no contribution from the 20 percent of Harvard families with annual incomes below $65,000, asks an average of 10 percent of income from the majority of families receiving financial aid, and does not require loans. Even families with incomes greater than $150,000 are eligible for aid depending on their particular circumstances, such as having multiple children in college or unusual medical or other essential expenses.

“The Harvard College Connection was mentioned frequently by applicants as a factor in their decision to apply,” said Marlyn E. McGrath, director of admissions. “While it will be several years before we have definitive information about the effect of this new electronic outreach, we are encouraged by what we have seen so far.

“The ethnic composition, gender breakdown, and geographic makeup of the applicant pool are very similar to last year,” she said. “There was a slight increase (11.7 percent) in the number of students interested in the humanities and small increases for other prospective concentrations, except for computer science, which had a 38.9 percent increase. The attention that ‘Computer Science 50: Introduction to Computer Science’ has received in the media and the Internet seems to have played a role.”

Applicants will be notified of the Admissions Committee’s decisions on March 31. Admitted students will be invited to Cambridge for Visitas, the visiting program for prospective freshmen, to be held this year from April 25-27. Students have until May 1, the national reply date, to notify Harvard and other colleges of their enrollment decisions.