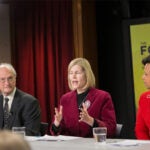 To combat international failure to reverse the global obesity epidemic, authors of a new paper are calling for governments to issue “smart food policies,” alongside joint efforts from industry and society to improve food environments and make healthy eating easier.

Lead author Christina Roberto, assistant professor of social and behavioral sciences and nutrition at Harvard T.H. Chan School of Public Health (HSPH), and say the idea that obesity is driven by either personal choice or the environment is a false dichotomy, and suggest that these competing perspectives be merged to show the reciprocal relationship between the individual and the places where he or she lives and eats.

The paper is one of a six-part series on obesity in The Lancet, published online today.

Global progress toward tackling obesity has been “unacceptably slow,” according to the series authors, with only one in four countries having implemented a policy on healthy eating by 2010.

“While we need to acknowledge that individuals bear some responsibility for their health, we also need to recognize that today’s food environments exploit people’s vulnerabilities and make it easier to eat unhealthy foods,” said Roberto. “This reinforces preferences and demands for foods of poor nutritional quality, leading to environmental changes that further encourage consumption of unhealthy foods.”

Although there have been isolated pockets of progress, no country to date has reversed its obesity epidemic, according to Roberto and colleagues. Among the barriers to action are lobbying from the food industry, restricted ability or unwillingness of governments to implement policies, and an absence of societal pressure for political action.

Another paper in the series, co-authored by Steven Gortmaker, professor of the practice of health sociology at HSPH, calls attention to the rise of childhood overweight and obesity — substantial in high-income countries and now rapidly increasing in poorer nations. The authors of that paper call for more regulation of advertising to children in addition to integrated nutrition policies that tackle both obesity and malnutrition, which co-exist in children worldwide.

Roberto, along with Kelly Brownell from Duke University, also co-authored a commentary as part of the series that proposes a model for tightening the flow of information between researchers and policymakers to ensure that research addresses issues relevant to policy and that scientific findings can inform decision-making.