From prison to poverty 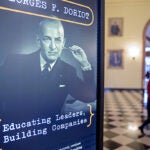 Released inmates return to a host of social ills, which often undermine them, study says

For years, Harvard sociologist Bruce Western has explored the relationships between political institutions and social and economic equality. Much of his work focuses on criminal justice policy, incarceration, and the effects of incarceration on poor communities. While at the Radcliffe Institute for Advanced Study, as an Evelyn Green Davis Fellow, Western has worked on a multiyear study that tracked the lives of 122 men and women who left prison and returned to their Boston neighborhoods. The work offers insights into how social conditions of American poverty shape the lives of those released from incarceration.

Western is Harvard’s Daniel and Florence Guggenheim Professor of Criminal Justice Policy, the director of the Malcolm Wiener Center for Social Policy, and faculty chair of the Program in Criminal Justice at the Harvard Kennedy School. He recently spoke with Gazette about his work.

GAZETTE: How did you get interested in this topic and this type of research?

WESTERN: I had been doing a lot of work on labor markets and unions, and I was interested in low-wage labor markets and low-income workers. In talking with people who were working in adjacent fields, partly on poverty and partly on criminal justice topics, it became clear to me that to really understand what poverty in America looks like today, we have to be looking at the criminal justice system and incarceration.

GAZETTE: I read that during your time teaching at Princeton, you first entered a correctional facility to teach a class for incarcerated men. Did that experience influence your current study?

WESTERN: It’s a funny research area. There’s a large quantitative literature analyzing big administrative data sets, or big social-survey data sets. And a lot of that research can feel very disconnected from the day-to-day experience of people who are contending with America’s prisons. I was discomfited by that, and I wanted that day-to-day experience to be better reflected in the work I was doing trying to understand the effects of incarceration. I think that was a big motivation for the Boston study. When I came up here to Harvard, I taught a junior tutorial with Kaia Stern, a lecturer in the sociology department, at MCI Norfolk with a group of Harvard students and a group of people who were incarcerated at Norfolk and enrolled through the Boston University college program.

GAZETTE: Can you tell me about the specifics of the Boston study?

WESTERN: Starting in January of 2012, we went into prison for a year. We would interview people about a week before they were scheduled to be released, and then we would interview them a couple of weeks later out in the community. We followed up with them over the next 12 months. We just got out of the field with our final respondent at the end of 2014. The median age of our sample at release was 34 years old. Half our sample was African-American, and the remainder was fairly evenly split between whites and Hispanics. Most of the sample grew up in poor neighborhoods in the Boston area. It’s mostly men, but we have 15 women in the sample of 122. The racial and gender breakdown and the age distribution are all quite representative of the prison population in Massachusetts generally.

‘Our data suggest we need to be thinking about interventions that are sustained through childhood and measures that can help stabilize the home lives of at-risk kids.’

GAZETTE: What kinds of correctional facilities were you working with?

WESTERN: There are 18 correctional facilities in the Massachusetts system, and we were in every one but two. People were being released from all security levels. We conducted interviews in the Bridgewater psychiatric hospital, in maximum-security prisons, in non-contact units behind Plexiglas. We had excellent support and cooperation from the Massachusetts Department of Correction, which really made it easy for us to go into prison and conduct our interviews. We also returned to prisons and county jails if people were incarcerated during the follow-up period.

GAZETTE: So the plan is to write a manuscript based on your findings?

WESTERN: I am beginning to write this up as a book manuscript, and we are also producing papers. We just had our first paper accepted on the study, and it will be coming out with the American Journal of Sociology later in the year.

GAZETTE: Why not just focus on releasing the information in the form of more standard academic papers?

WESTERN: I want to try and describe the life experience of the people who we’ve been talking to. For me, as a quantitative sociologist, that’s a bit of a shift in register. So I somehow needed to use a format that would be better suited to trying to tell people’s stories.

I think the second thing I want to do is to try and make some assessment of the ethical significance of our system of punishment. What should we think about these institutions? Are they just in some fundamental sense? Are they able to fully respect the humanity of the people whom they incarcerate? I think those ethical sorts of questions also probably fall outside of the scope of the scientific paper. The science is absolutely, fundamentally important. One of the main scientific contributions of the study is that we were able to maintain an incredibly high retention rate, over 90 percent, for what is essentially a homeless population with no independent housing. But this other sort of work, that tries to engage people’s biographies and tries to start an ethical conversation about our prisons, that may be better suited to a book rather than the scientific journals.

GAZETTE: Did you come away with any strong sense about what needs to happen, what systems need to be in place, for people re-entering society after prison?

WESTERN: I think probably the most striking finding is that just about everyone leaves prison and enters poverty. About 85 percent of our respondents, by the end of their first year out, enrolled in food stamps. Nearly everyone is enrolled in MassHealth. And lots of people are experiencing very serious housing insecurity, serious unemployment problems. Many are continuing to struggle with addiction and mental illness. And so there’s a deep social service need in the population. They are living under conditions that are materially insecure. This is the reality of people’s everyday lives as we were talking to them.

I think this is different from the kinds of understandings that dominate policy conversations in criminal justice. Normally when we talk about people coming out of prison, the conversations are about the threat to public safety that they are perceived to pose. But to the extent that there is a threat to public safety, it’s happening in this context of real material deprivation and often-serious needs for treatment, which go unmet. It’s early days now in the assessment of the material. We are still analyzing and writing up. But that’s the picture that’s emerging.

GAZETTE: Are there are any firm sets of recommendations that your research points to?

WESTERN: We are just starting to review the data, but already there are a couple of real success stories in the data that I think also serve as models for policy. In Massachusetts, very unusually, people are enrolled in MassHealth before they are released. And this winds up being enormously important, particularly over the first couple of months for people. The possibility of doing this nationwide, Medicaid enrollment before prison release, this seems possible under Medicaid expansion in the Affordable Care Act, and I think that’s something that should be looked at as a national policy innovation in the area of re-entry policy, at least in the states that adopt Medicaid expansion.

Another bright spot in the data that’s relevant for policy is the continuity of employment for people on work release. These are people in low-security facilities who go out in the daytime to work at a job. In a lot of these cases, work-release jobs were retained after release, and this continuity of employment and the savings provided by the work-release job are really important for the transition out. As prison populations grew over the last 30 years, there have been fewer and fewer work-release jobs. Work-release programs have really been cut back, but they help people return home, and they need a second look.

GAZETTE: Did the work that you’ve done offer any insight on how to help people before they end up in prison?

WESTERN: That’s a really great point. What we see in our data is extraordinary exposure to violence over a lifetime. People’s childhood environments are often very, very chaotic and very violent. And these sorts of problems, I think, they seem more serious to me than the kinds of problems that are addressed by our current policy conversation. Our current policy conversation is very much focused on the early child and programs like Head Start and pre-K programs for young kids and school programs, after-school, and on weekends for older kids. The problems that we see in our data, and of course we are selecting on a group of people who have had extraordinarily difficult lives, would require a very robust policy intervention that would seem to go beyond a pre-K program or school programs. It’s very challenging.

I think there isn’t one point in the life course that you could pinpoint and say, if we can fix from ages 2 to 4, say, then we are going to get really good outcomes over the life course. People are often dealing in a sustained way with all sorts of problems that are largely beyond their control, that have to do with their home environments, their neighborhood environments. Our data suggest we need to be thinking about interventions that are sustained through childhood and measures that can help stabilize the home lives of at-risk kids in a sustained way.

GAZETTE: You mentioned poverty. Countless other studies demonstrate that poverty and incarceration are closely linked. Did your recent research shed any new light on that correlation?

WESTERN: One of the most striking things is that when we looked closely at the texture of people’s lives, poverty in the narrow sense, having a very low income, was only one part of what they were dealing with. It was the things that accompanied poverty, like untreated addiction and mental illness, very severe housing insecurity, chronic unemployment, and often a very, very complicated web of family relationships. It was these things as much as having a very low income that people were really struggling with. And the nature of their disadvantage, I think, can’t be reduced to having a very low income. It’s the confluence of a whole variety of largely untreated, unaddressed problems, some of which have accumulated over a lifetime, that we need to be thinking about as a social-policy problem.

GAZETTE: How did putting such a human face on the work you do change your own perceptions about the work and the issues you are trying to address?

I had worked on the problem of mass incarceration in America for a long time before starting this project, and I think it presents us as a society with a deep moral challenge. I wanted to try and speak to that in a way that recognized the humanity of the people that were most affected. So often, people who are involved in crime and the criminal justice system are really, profoundly vilified. I think in policy debate and sentencing policy, for example, people who wind up in the criminal justice system are not regarded as fully members of our community. So I wanted to try and speak to people’s humanity as a way of trying to address the deep stigma that usually accompanies a criminal record and incarceration.

Western will discuss his work on Wednesday at 4 p.m. in the Sheerr Room of Fay House in Radcliffe Yard.