Dimensions of war, including peace 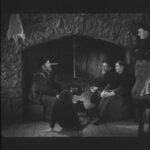 Flaherty retrospective to include Irish gem

Decisions toward and away from violence examined in Mellon Seminar

It was almost a decade ago that Harvard literary scholar Homi K. Bhabha took over as director of what is now the Mahindra Humanities Center. One vision he had was of a University-wide seminar to address, in detail, year by year, the most vital issues gripping the world.

Some dreams come true, and this one did. Last fall the Andrew W. Mellon Foundation Seminar, funded for three years, welcomed its first class of fellows. All three years will have a common theme, the intersection of violence and nonviolence. Aptly, the 2014-2015 series has a sub-theme that looms in the present cultural discourse — war.

For one thing, armed conflicts around the globe have claimed hundreds of thousands of lives in recent years. (The Syrian civil war tops the list, with nearly 200,000 dead so far.) For another, people everywhere are marking the centennial of World War I, looking back in puzzlement and horror at a conflict that killed 16 million people and wounded another 20 million.

Bi-weekly seminars in the Mellon series started in October, with presentations and discussions based on pre-circulated papers related to violence and nonviolence in war. Taking part are six Mellon Seminar Fellows and a mix of nine Harvard postdoctoral fellows and Boston-area graduate students.

During the fall semester, as will be the rule over the life of the program, there were a number of associated public lectures. Columbia University anthropologist Partha Chatterjee took on “International Law and the Pedagogy of Violence” (Oct. 23). University of California, Irvine, comparative literature scholar Ếtienne Balibar presented a two-part series on violence, civility, and politics (Nov. 4-5). And Columbia professor of modern Arab studies Rashid Khalidi delivered the Hrant Dink Memorial Peace and Justice Lecture on “Unhealed Wounds of World War I: Armenia, Kurdistan, and Palestine” (Nov. 13).

The first big conference of the Mellon program ― there will be two annually — unfolds this week as “In Our Time: The Great War at 100,” on Feb. 12 and 13. Panelists will set the cultural and political stage for what was once called the War to End All Wars.

Also beginning this week is a companion series at the Harvard Film Archive, “Grand Illusions: The Cinema of World War I,” to run Feb. 13 to March 2. The first feature is “All Quiet on the Western Front” (1930), a harrowing anti-war war movie that was banned in Nazi Germany.

University of Oxford historian Margaret MacMillan will deliver the Feb. 12 keynote address. She is the author of “The War that Ended Peace: The Road to 1914” (2013), a 739-page study whose summary might read: The war could have been avoided. The book, with its emphasis on the few personalities making decisions back then, underscores what historian A.J.P. Taylor once observed and what so few were willing to believe, “that great events have small causes.”

Even a big war may start on a very small scale. But on every scale war is a spectacle, as are the attempts at justice that follow. And in every war, violence and nonviolence intersect. December and January marked the 100th anniversary of the World War I Christmas truce that lasted well beyond the holiday in some sectors of the front.

Bhabha reached into the nearer past. After the 1994 neighbor-on-neighbor genocide in Rwanda that killed 800,000, he said, the same “instruments and institutions that shaped the worst violence became the sites of nonviolent negotiation.” Some examples: radio, local bars, and clubs.

Nonviolence can rise out of its opposite even within a single politically potent figure, observed Bhabha. Mahatma Gandhi was “obsessed with warfare and even the nobility of warfare,” he said, yet his project of nonviolent action made him famous. Similarly, Nelson Mandela rose out of “a place of violence, prison, and had been involved in violent struggle,” said Bhabha, but in the end preached peaceful reconciliation in South Africa.

The Mellon series joins the Mahindra Center’s traditional seminars. They are wide-ranging too ― from American literature to cartography, opera, and women and culture in the early modern world. Some of these traditional seminars date to 1984, when the Humanities Center was founded as the more narrowly focused Center for Literary Studies. And they are pleasingly, smartly episodic, and create glimpses of bright scholarship.

But the Mellon Seminar is intended to be a lingering study of a big subject from a variety of perspectives, said Bhabha. “There is no one convening discipline.” Episodes of individual scholarship give way to long-term collaborations in pursuit of larger meaning.

Part of the mission will be to examine how different disciplines investigate a phenomenon as big and important as war, or as puzzling as the ways violence and nonviolence intersect. In part, Bhabha said, the three-year program is “a seminar on how interdisciplinary systems of knowledge work.”

The initiative, over time, may reveal “how one discipline veers toward another in a process of self-understanding,” said Bhabha.

He gave an example. “The law always plays a role in dealing with violence. A legal thread is always present,” said Bhabha. The business of law is to gather testimony. On the other hand, literature — with its emphasis on narrative and storytelling ― can broaden the understanding of what legal testimony means. It adds affect to legal testimony intended to be without affect.

At the same time, the Mellon series will look at clashes of scale within the arena of violence and nonviolence. In Rwanda, for instance, the United Nations set in motion the International Criminal Tribunal for Rwanda (1997-2012). But at the community level, the Gacaca courts from 1996 to 2006 meted out justice in the same social spaces where violence originated.

“To see violence on a civilizational scale is a problem,” said Bhabha, if inquiry stops at the large scale. Meanwhile, “neighborliness is the site for a fight over a cup of sugar,” he said, thinking of Rwanda two decades ago. “But it’s also the site of genocidal violence.”

The 2015-2016 iteration of the Mellon Seminar will have such matters of scale in mind. The year’s focus will be “everyday violence,” a topic that includes a litany of the familiar: protest, incarceration, domestic violence, white-collar crime, and identity-based violence.

The first major conference of the Mellon program, “In Our Time: The Great War at 100,”  Feb. 12 and 13, will have a keynote address delivered by University of Oxford historian Margaret MacMillan, author of “The War that Ended Peace: The Road to 1914.” Also beginning this week is a companion series at the Harvard Film Archive, Feb. 13 to March 2.