A trap for greenhouse gas 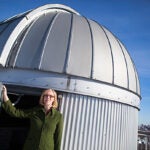 A team of researchers has developed a novel class of materials that enable a safer, cheaper, and more energy-efficient process for removing greenhouse gas from power-plant emissions. The approach could be an important advance in carbon capture and sequestration.

The team, led by scientists from Harvard University and Lawrence Livermore National Laboratory, employed a microfluidic assembly technique to produce microcapsules that contain liquid sorbents, or absorbing materials, encased in highly permeable polymer shells. They have significant performance advantages over the carbon-absorbing materials used in current capture and sequestration technology.

The work is described in a paper published online today in the journal Nature Communications.

“Microcapsules have been used in a variety of applications — for example, in pharmaceuticals, food flavoring, cosmetics, and agriculture — for controlled delivery and release, but this is one of the first demonstrations of this approach for controlled capture,” said Jennifer A. Lewis, the Hansjörg Wyss Professor of Biologically Inspired Engineering at the Harvard School of Engineering and Applied Sciences (SEAS) and a co-lead author. Lewis is also a core faculty member of the Wyss Institute for Biologically Inspired Engineering at Harvard.

Power plants are the single largest source of carbon dioxide (CO2), a greenhouse gas that traps heat and makes the planet warmer. According to the U.S. Environmental Protection Agency, coal- and natural gas–fired plants were responsible for a third of U.S. greenhouse gas emissions in 2012.

Current carbon-capture technology uses caustic amine-based solvents to separate CO2 from the flue gas escaping a facility’s smokestacks. But state-of-the-art processes are expensive, result in a significant reduction in a power plant’s output, and yield toxic byproducts. The new technique employs an abundant and environmentally benign sorbent: sodium carbonate, which is kitchen-grade baking soda. The microencapsulated carbon sorbents (MECS) achieve an order-of-magnitude increase in CO2 absorption rates compared to sorbents currently used in carbon capture. Another advantage is that amines break down over time, while carbonates have a virtually limitless shelf life. 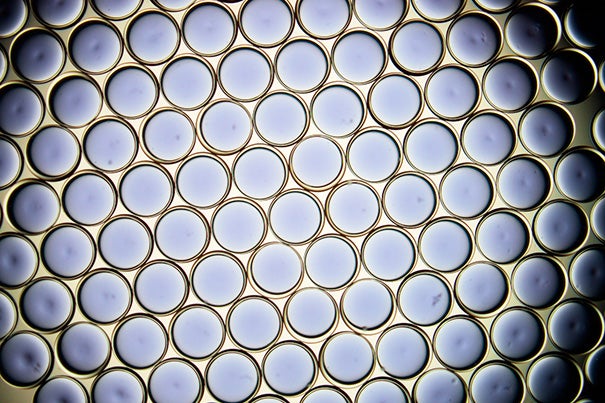 “MECS provide a new way to capture carbon with fewer environmental issues,” said Roger D. Aines, leader of the fuel cycle innovations program at Lawrence Livermore National Laboratory and a co-lead author. “Capturing the world’s carbon emissions is a huge job. We need technology that can be applied to many kinds of carbon dioxide sources, with the public’s full confidence in the safety and sustainability.”

Researchers at Lawrence Livermore and the U.S. Department of Energy’s National Energy Technology Lab are now working on enhancements to the capture process to bring the technology to scale.

Aines says that the MECS-based approach could also be tailored to industrial processes like steel and cement production, which are significant greenhouse gas sources.

“These permeable silicone beads could be a ‘sliced-bread’ breakthrough for CO2 capture — efficient, easy-to-handle, minimal waste, and cheap to make,” said Stuart Haszeldine, a professor of carbon capture and storage at the University of Edinburgh, who was not involved in the research. “Durable, safe, and secure capsules containing solvents tailored to diverse applications can place CO2 capture … firmly onto the cost-reduction pathway.”

MECS are produced using a double-capillary device in which the flow rates of three fluids — a carbonate solution combined with a catalyst for enhanced CO2 absorption, a photo-curable silicone that forms the capsule shell, and an aqueous solution — can be independently controlled.

“Encapsulation allows you to combine the advantages of solid-capture media and liquid-capture media in the same platform,” said Lewis. “It is also quite flexible, in that both the core and shell chemistries can be independently modified and optimized.”

“This innovative gas separation platform provides large surface areas while eliminating a number of operational issues, including corrosion, evaporative losses, and fouling,” said Ah-Hyung (Alissa) Park, the chair in applied climate science and associate professor of Earth and environmental engineering at Columbia University, who was not involved in the research.

Funding for the encapsulated liquid carbonates work was provided by the Innovative Materials and Processes for Advanced Carbon Capture Technology program of the U.S. Department of Energy’s Advanced Research Projects Agency–Energy.