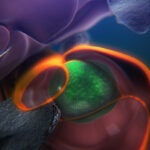 A new study by investigators at Dana-Farber Cancer Institute, a Harvard affiliate, demonstrates that vitamin D can protect some people with colorectal cancer by perking up the immune system’s vigilance against tumor cells.

The research, published today by the journal Gut, represents the first time that a link between vitamin D and the immune response to cancer has been shown in a large human population. The finding adds to a growing body of research showing that vitamin D — known as the “sunshine vitamin” because it is produced by the body in response to sunlight exposure — plays a key role in cancer prevention.

“People with high levels of vitamin D in their bloodstream have a lower overall risk of developing colorectal cancer,” said the study’s senior author, Shuji Ogino of Dana-Farber, the Harvard T.H. Chan School of Public Health, and Brigham and Women’s Hospital. “Laboratory research suggests that vitamin D boosts immune system function by activating T cells that recognize and attack cancer cells. In this study, we wanted to determine if these two phenomena are related: Does vitamin D’s role in the immune system account for the lower rates of colorectal cancer in people with high circulating levels of the vitamin?”

Ogino and his colleagues theorized that if the two phenomena were connected, then people with high levels of vitamin D would be less likely to develop colorectal tumors permeated with large numbers of immune-system cells. Colorectal tumors that do develop in these individuals would, by the same logic, be more resistant to the immune response.

To determine if this was in fact the case, the research team drew on data from 170,000 participants in the Nurses’ Health Study and Health Professionals Follow-Up Study, two long-term health-tracking research projects. Within this population, the scientists compared carefully selected groups of 318 colorectal cancer patients and 624 cancer-free individuals. All 942 of them had blood samples drawn in the 1990s, before any developed cancer. The investigators tested these samples for 25-hydroxyvitamin D — abbreviated 25(OH)D — a substance produced in the liver from vitamin D.

They found that patients with high amounts of 25(OH)D indeed had a lower-than-average risk of developing colorectal tumors that were enriched with immune-system cells.

“This is the first study to show evidence of the effect of vitamin D on anti-cancer immune function in actual patients, and vindicates basic laboratory discoveries that vitamin D can interact with the immune system to raise the body’s defenses against cancer,” Ogino said. “In the future, we may be able to predict how increasing an individual’s vitamin D intake and immune function can reduce his or her risk of colorectal cancer.”

Funding for the study was provided by the National Institutes of Health, the Friends of Dana-Farber, the Bennett Family Foundation, the Entertainment Industry Foundation, and the Paula and Russell Agrusa Fund for Colorectal Cancer Research.