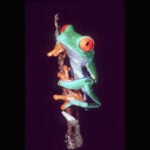 Just about all parents would agree — infants undergo a nearly magical transformation from 3 to 6 months. Seemingly overnight, they can smile and laugh, and they squeal with delight when tickled. They babble, have “conversations” with those around them, and start to respond to their own names.

A new Harvard study adds one more item to the list — solving the invariance problem.

Among the thorniest challenges in the study of speech perception, the invariance problem was first identified in the 1950s, when scientists began using instruments to analyze spoken language.

What they discovered was that although syllables such as “ba,” “be,” and “bo” all sound as if they begin with the same consonant sound, in fact, each is different, in some cases dramatically so. Why, then, did people interpret the sounds as being identical?

It’s a question that is at the heart of a new study co-authored by Jean-Remy Hochmann, a postdoctoral fellow working in the lab of Susan Carey, the Henry A. Morss Jr. and Elisabeth W. Morss Professor of Psychology, and Liuba Papeo, a postdoctoral fellow working in the Harvard Cognitive Neuropsychology Laboratory of Alfonso Caramazza. The research, described in a recent paper in Psychological Science, shows that children as young as 6 months can solve the invariance problem.

To analyze speech perception among 3- and 6-month-old infants, the researchers designed two experiments aimed at testing the motor theory of speech perception, long the prevailing idea for how individuals manage the invariance problem.

Several recent discoveries, particularly the emergence of what researchers call “mirror” neurons, which fire both when performing and when observing an action, have bolstered the theory.

Hochmann and colleagues wanted to test a particular idea in the motor theory — that the ability to solve the invariance problem only appears once an individual has produced syllables and learned to associate a sound with the way it is produced. Therefore, the invariance problem should not be solved before infants babble actual syllables, which rarely occurs before they are 7 months old.

Testing was anything but easy, due in no small part to the fact that the subjects could barely sit up, let alone answer questions. The solution was a unique experimental design that not only tracked infants’ eyes, but measured when, and by how much, their pupils dilated when listening to spoken words.

“This technology has been around for 10 years or so … and there are many labs using eye tracking with infants, but the studies that used it were largely looking at anticipation,” Hochmann said. “This is one of the first that looks at pupillometry, and is the first we know of that shows an affect for acoustic stimuli. Others have used it for visual stimuli, but this is the first to use purely acoustic stimuli — that’s an important distinction, because you expect the pupil to react to visual changes, but not necessarily to acoustic changes.”

The study involved two experiments, separate but nearly identical in design, one to test the validity of the method, and the other to test whether infants could solve the invariance problem.

In a darkened room, infants sat with their parents in front of a computer screen that played a video designed to hold their attention and allow the eye-tracking system to work properly. In the first experiment, infants listened to a voice repeat a single syllable over and over. In a quarter of the tests, however, the voice included a new, unique syllable.

“The idea is that when they hear the new sound, it should come as a surprise, and it should increase their attention as exhibited by pupil dilation,” Hochmann said. “That worked with both 3- and 6-month-olds, and showed the experimental design would work.”

In the second experiment, infants heard a voice that repeated syllables that, while different, all began with the same consonant — for example, “ba,” “be,” and “bo.” In some instances, a syllable beginning with a different consonant sound was included.

“If they can perceive the same consonant in different syllables, they should react to the one syllable that has a different consonant,” Hochmann explained. “What we found was that while 3-month-olds showed no reaction, 6-month-olds did react.”

Hochmann said he hopes to explore whether the results can be demonstrated using other consonants, whether simplifying the stimulus might produce a result in younger infants, and what may be changing between the ages of 3 and 6 months that allows infants to solve the invariance problem.