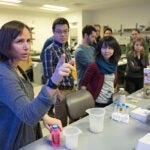 Beyond the lab and library

Laughs all around as Poehler claims her Pudding Pot

It was a day filled with grade-school mockery, stuffed animals, cross-dressing, and above all else, uproarious laughter. Amy Poehler felt right at home.

The Massachusetts-born comedian — best known for her role as Leslie Knope, the plucky Midwest parks director on the hit NBC show “Parks and Recreation” — was honored Thursday as Hasty Pudding’s 2015 Woman of the Year. The celebration kicked off with the star’s hosts ushering her motorcade down Massachusetts Avenue amid a mob of fans.

“Amy Poehler is one of the funniest people on the planet,” said Dan Milaschewski ’17, a member of the Hasty Pudding crew, who was outfitted with a tie-dyed unicorn costume. “I grew up with her and I’m just so happy to be here.”

Once the motorcade arrived at its destination, Farkas Hall, the honoree was showered with cheers and adulation from the crowd huddled tightly along Holyoke Street. From there, the party carried on to its second act, a thorough roasting courtesy of the Hasty Pudding Theatrical players.

“The first rule of improv is to always say yes,” began Jason Hellerstein ’15, president of Hasty Pudding. “Something our Woman of the Year unfortunately did when she agreed to appear in the movie ‘Alvin and the Chipmunks: The Squeakquel.’ ”

Serving as co-host, Vice President Sam Clark ’15 joined in: “Amy lent her voice to Bessie Higgenbottom on the show ‘The Mighty B!,’ in which a young Girl Scout attempts to earn as many scout badges as possible. Similarly, if she collects enough Emmy nominations, she might actually win one.”

Poehler wasn’t going to let that one go. As a founding member of the Upright Citizens Brigade and a veteran of “Saturday Night Live,” she is no newcomer to the art of improvisation. While her hosts’ jabs were harsh, Poehler countered impressively.

“I’d like to thank Hasty Pudding for reminding us how hard it is to write funny jokes,” she said. She went on to say that she would “treat this award with the respect that any fake award deserves.”

After freestyling with summer campers, a throwback to her role in the movie “Wet Hot American Summer,” and a dance-off with the “Plastics” from “Mean Girls,” Poehler had earned her Pudding Pot. As the show closed, she finally admitted, with sincerity, that she was “truly honored to accept this award.”

Poehler had encouraging words for aspiring performers who are hampered by self-doubt. “My advice to people is to get out of your head, stop talking about it, just do it instead. Talk less, do more.”

She also gave a nod to Chris Pratt, her “Parks” co-star, who happens to be the 2015 Man of the Year. “He’s such a peach, he’s going to have such a good time,” she said. “My only regret is that we can’t be here together. But maybe that would be too much in one room.”

Hasty Pudding will honor Pratt on Feb. 6 at 8 p.m. in Farkas Hall. For more information on Hasty Pudding Theatricals, visit its website.