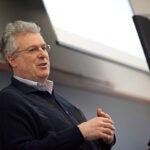 Guided the formation of the High-Z Supernova Search Team

Harvard’s Clowes Professor of Science Robert P. Kirshner ’70 will share the 2015 Wolf Prize in Physics with Professor James Bjorken of Stanford University. They will split the $100,000 award.

The Wolf Prize in Physics is one of five prizes in the arts and sciences awarded annually by the Wolf Foundation. It is an international award presented to living scientists and artists for “achievements in the interest of mankind and friendly relations among people.” The Wolf Prize in Physics is often considered the most prestigious award in that field after the Nobel Prize.

“I am very gratified to receive this recognition. The list of previous Wolf Prize winners is awe-inspiring,” said Kirshner.

Kirshner has devoted his professional life to cutting-edge research on cosmology and supernovae, the foundation said. “He created the group, environment, and directions that allowed his graduate students and postdoctoral fellows to uncover the acceleration in the expansion of the universe. This discovery is a landmark in fundamental physics and astronomy and presents a profound challenge to theorists.”

Kirshner guided the formation of the High-Z Supernova Search Team, one of the two teams widely credited with the discovery of cosmic acceleration. This universal acceleration implies the existence of dark energy.

Especially important was Kirshner’s insistence that the data be obtained at more than one color to allow separation of dust from cosmic motion effects in the photometry data, the judges’ panel said.

Kirshner has been on the Harvard faculty since 1986. He served as Astronomy Department chair from 1990 to 1999, master of Quincy House from 2001 to 2007, and this term is teaching a large undergraduate course in the General Education program. He is the author of an award-winning book, “The Extravagant Universe: Exploding Stars, Dark Energy, and the Accelerating Cosmos.”