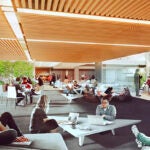 On their first day back to school after holiday break, more than 750 students from the Jackson Mann K-8 School and Gardner Pilot Academy in Allston packed the stands at Lavietes Pavilion to watch the Harvard women’s basketball team take on the University of Tennessee at Chattanooga.

Some students held handmade signs rooting for the Crimson, while other signs simply said “Thank You, Harvard.”

The students were on campus for Harvard’s first “education day,” which aimed to give them a firsthand look at the life of student athletes.

“Creating education day around the Harvard women’s basketball game was an opportunity to introduce children from neighboring schools to hear from student athletes and visit our facilities before the competition, as well as to participate in the Harvard experience at a game,” said Sue Byrne, the University’s associate director of athletics, sales and marketing.

“Events like this are important since they integrate athletics and academics and build community and pride in Harvard,” she said. “The Jackson Mann School and Gardner Pilot Academy were so receptive to our invitation, and their collaboration was tremendous. We hope to make next year’s event even bigger and better.”

Harvard student athletes on the wrestling, women’s track and field, and men’s tennis teams were on hand to talk to the children about the challenges and rewards of taking part in sports. They discussed the value of a healthy lifestyle and the importance of taking their studies as seriously as their training.

“As students walked into Harvard athletic facilities you could hear the ‘oohhs’ and ‘aahhs’ at the impressive equipment and the positive messages that students received from undergrads about what it takes to be a student first and an athlete second, which was a very valuable learning moment for our students. It is opportunities like these that enable students to envision their future educational and athletic goals,” said Lauren Fogarty Lafferty, director of extended services at the pilot academy. “Overall, the trip was a great opportunity for students and staff to deepen their sense of community among one another and with Harvard.”

“It was a very special experience. Education day reminds the players where they came from and shows the kids who they can be. It is an inspiration and motivation to everyone both on and off the court,” said AnnMarie Healy ’16, a forward on Harvard’s women’s basketball team.

The student athletes demonstrated some tricks of their trade — such as wrestling moves, how to take off from starting blocks, and how to hop into the long-jump pit. During the actual basketball game, students joined in timeout T-shirt tosses, trivia questions, and of course the Wave. Teachers from both Jackson Mann and the pilot academy even tried their hands at a game of halftime knockout.

The Crimson fell just shy of a victory, losing by a buzzer-beater, but the guests didn’t seem to mind, as they cheered until the last second.

“What an exciting day. We came close to knocking off one of the top teams in the country, with the help of our fans from Gardner Pilot Academy and the Jackson Mann School,” said Kathy Delaney-Smith, head coach of the women’s basketball team. “We look forward to welcoming the kids back to Harvard next year.”