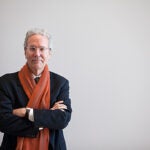 Lentz to step down

Jeffrey Hamburger, the Kuno Francke Professor of German Art and Culture and a world authority on the religious art of the Middle Ages, has been named a recipient of this year’s Anneliese Maier Research Award.

The award, presented annually by the Bonn, Germany-based Alexander von Humboldt-Stiftung Foundation, honors researchers in the humanities and social sciences whose academic achievements have been internationally recognized. Winners receive €250,000, which they use to collaborate over a five-year period with scholars of their choosing in Germany.

Hamburger plans to work with Professor Eva Schlotheuber, a member of the History Department at the Heinrich Heine University in Düsseldorf, to advance fundamental research in medieval studies, especially art history and cultures of knowledge in the Middle Ages.

“I am, of course, deeply honored and grateful to have received this award, which, in addition to supporting my own research, will permit me to conduct a series of seminars and workshops in Germany with advanced students from both Harvard and abroad. In addition to focusing on topics of special interest to me, such as liturgical manuscripts, monastic libraries, and exegetical diagrams, the seminars will be designed to train students in the basic skills required to analyze a wide range of primary sources from the Middle Ages, visual as well as verbal.”

Among Hamburger’s pursuits has been a focus on lesser-known works of art — for example, those from female monasteries, which offer new insights into medieval society, religion, and culture from a woman’s perspective. Hamburger has also opened new avenues for investigation by studying unpublished materials.

Hamburger received a doctorate from Yale and worked in Ohio and Toronto before coming to Harvard in 2000. In 2008, he was named the Kuno Francke Professor of German Art and Culture.

In addition to serving as a visiting professor in Paris; Oxford, England; Leuven, Belgium; Hamburg, Germany; and Zurich, Hamburger has been a senior visiting fellow at the Warburg Institute in London, and was a Humboldt Research Fellow at Munich’s Zentralinstitut für Kunstgeschichte in 1996-97. Hamburger has received many awards, including an honorary degree from the University of Bern in Switzerland, and is a member of several scientific organizations, including the American Academy of Arts and Sciences and the American Philosophical Society.