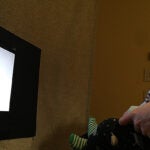 For the first time, scientists have found evidence of neuroinflammation in key regions of the brains of patients with chronic pain, according to a new study from Massachusetts General Hospital (MGH), a Harvard affiliate.

By showing that levels of an inflammation-linked protein are elevated in regions known to be involved in the transmission of pain, the study paves the way for the exploration of potential new treatment strategies. Published online in the journal Brain, the study also identifies a possible way around one of the most frustrating limitations in the study and the treatment of chronic pain — the lack of an objective way to measure the presence or intensity of pain.

“Finding increased levels of the translocator protein in regions like the thalamus — the brain’s sensory gateway for pain and other stimuli — is important, since we know that this protein is highly expressed in microglia and astrocytes, the immune cells of the central nervous system, when they are activated in response to some pathologic event,” said Marco Loggia of MGH-based Martinos Center for Biomedical Imaging, the lead author of the report.

While numerous studies have clearly associated glial activation with persistent pain in animal models, none have previously documented glial activation in the brains of humans with chronic pain. The current study initially enrolled 19 patients with chronic lower-back pain and 25 healthy controls. In a subset of 10 patients and nine pain-free controls — carefully selected from the initial larger group based on sex, age, and genetic characteristics — brain imaging studies were conducted with the Martinos Center’s integrated PET/MR scanner using a new radiopharmaceutical that binds to the translocator protein (TSPO).

Loggia and colleagues found that the levels of the protein in the thalamus and other brain regions were significantly higher in patients than in controls. The PET signal increases were so remarkably consistent across participants, Loggia noted, that it was possible to spot which were the patients and which were the controls just by looking at the individual images prior to detailed statistical analysis of the data.

Another interesting finding was that among the patient participants, who had been asked to report their current levels of pain during the imaging session, those with the highest levels of TSPO reported lower levels of pain.

Loggia explained, “While upregulation of TSPO is a marker of glial activation, which is an inflammatory state, animal studies have suggested that the protein actually limits the magnitude of glial response after its initiation and promotes the return to a pain-free, pre-injury status. This means that what we are imaging may be the process of glial cells trying to ‘calm down’ after being activated by the pain.

“Those participants with less pain-related upregulation of TSPO may have a more exaggerated neuroinflammatory response that ultimately leads to more inflammation and pain. While larger studies would be needed to further support this interpretation, this evidence suggests that drugs called TSPO agonists, which intensify the action of TSPO, may benefit pain patients by helping to limit glial activation.”

Loggia noted that the ability to image glial activation could identify patients for whom the drugs targeting the process would be most appropriate. Future studies should investigate whether the same glial activation patterns are seen in patients with other forms of chronic pain or whether particular “glial signatures” differentiate specific syndromes or pathologic mechanisms.