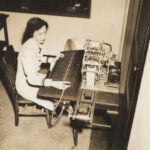 The answers to the human past are out there, hidden in the DNA of bones in ancient burial mounds and unmarked graves.

Increasingly, those answers are coming to light as geneticists at Harvard and elsewhere employ sophisticated methods to extract that DNA and make it readable despite the ravages of time.

On Tuesday, geneticists from Harvard Medical School (HMS) and the Broad Institute of Harvard and MIT highlighted those evolving techniques and talked about recent findings that revealed that a previously unknown group made a major contribution to the gene pool of modern Europeans and Native Americans. They also discussed the result of preliminary investigations that suggest that an ancient civilization located between the Black and Caspian seas may have created a major group of modern languages, spanning English, German, Russian, Urdu, Punjabi, and Hindi.

Michael McCormick, the Francis Goelet Professor of Medieval History, said the new techniques are opening “an extraordinary window on the human past” and make a powerful partner to traditional historical and archaeological techniques in understanding humanity’s hidden history.

“You and I have the extraordinary privilege of living in a time of revolutionary discovery … that extends advances of technology in the life sciences that are transforming the world today to … disciplines that are transforming our understanding of the human past, dissolving the timeworn barriers between history and prehistory, between science and the humanities,” McCormick said. “Human genetics are another extraordinary window on a vanished world of migrations and matings that take you back literally to the dawn of human time.”

McCormick introduced a talk at the Harvard-Yenching Library by Harvard Medical School genetics Professor David Reich, an associate at the Broad Institute, and Nick Patterson, the senior computational biologist at the Broad and visiting scientist and a research fellow in genetics at HMS and the Harvard T.H. Chan School of Public Health.

The lecture, “What’s New in Genomic Archaeology? The Peopling of Europe from Ancient and Modern DNA,” was sponsored by the Initiative for the Science of the Human Past at Harvard, whose steering committee McCormick chairs.

Reich highlighted recent research indicating that ancient European history was more complex than previously had been thought. Researchers had believed that Middle Eastern farmers pushed into Europe 8,500 years ago, after the advent of agriculture, displacing and blending with hunter-gatherer populations there over several thousand years.

First, Reich said, the genetic data clarifies that people migrated into the region, bringing farming with them, rather than agricultural practices spreading alone as they were learned, adopted, and passed along by different societies coming into contact with the cultures practicing them.

As expected, the genetic data showed that modern Europeans hold a mix of genes from Middle Eastern farmers and the European hunter-gatherers who preceded them into Europe. But it also shows that modern Europeans have genetic contributions from a third group, originating in ancient north Eurasia, that was unknown before research from Reich and collaborators was published in September. It appears that this group eventually spread not just into Europe, but also to North America, since their genes are represented in Native Americans.

That ancient north Eurasian population was apparently replaced in the lands between, however, because there’s no trace of their DNA in modern Siberians.

Patterson discussed early work that investigated the rise of one of the world’s predominant language groups: Indo-European. Hundreds of languages belong to the family today, including some of the most widely spoken, such as English, Spanish, Russian, and Hindi.

Patterson said that linguistic evidence has tracked the ancestral language, called “late proto-Indo-European” to about 3,500 years ago in the Caucasus, among a people who had wheeled vehicles at a time when they were just being put into use.

Genetic evidence ruled out one likely related group in the region, the Yamnaya, because their DNA showed the group had hunter-gatherer ancestry, which is inconsistent with the fact that two Indo-European groups, Armenians and Indians, don’t share it, Patterson said. That made Patterson look south, to the Maikop civilization, which likely had significant contact with the Yamnaya, as a plausible culture where Indo-European languages originated. Samples have been obtained from Maikop burial sites, but the DNA work to test that proposal is pending, Patterson said.

Such testing is dependent on sophisticated techniques, Reich said. When DNA can be extracted from bones found at burial sites, most of it actually is microbial DNA from the organisms that have colonized the bones since its owners’ death. In addition, researchers have to be careful that samples aren’t contaminated by handling after they are unearthed.

Reich’s lab uses a technique that targets 390,000 sites of variation on the human genome, extracts them from background DNA, and allows them to generate genome-wide data.

“A lot of it is microbial. Typically only 1 percent comes from the individual whose bone it was,” Reich said.