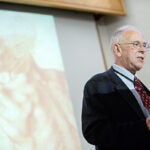 ‘Theory of everything’ captures Weinberg’s imagination in Lee Historical Lecture

If physicists want to find their long-sought “theory of everything,” they have to get small. And Nobel Prize-winning theoretical physicist Steven Weinberg thinks he knows roughly how small.

Weinberg, who spoke at a packed Geological Lecture Hall Monday evening, said there are hints that the answers to fundamental questions will reveal themselves at around a million billionths — between 10­-17 and 10-19 — of the radius of the typical atomic nucleus.

“It is in that range that we expect to find really new physics,” said Weinberg, a onetime Harvard professor now on the faculty at the University of Texas at Austin.

Physicists understand that there are four fundamental forces of nature. Two are familiar in our everyday lives: those of gravity and electromagnetism. The two less-familiar forces operate at the atomic level. The strong force holds the nucleus together while the weak force is responsible for the radioactive decay that changes one type of particle to another and the nuclear fusion that powers the sun.

Weinberg, who won the 1979 Nobel Prize in Physics, with Sheldon Glashow and Abdus Salam, for electroweak theory explaining how the weak force and electromagnetism are related, returned to Harvard to deliver the Physics Department’s annual David M. Lee Historical Lecture. He was introduced by department chair Masahiro Morii and by Andrew Strominger, the Gwill E. York Professor of Physics, who recalled taking Weinberg’s class on general relativity as a Harvard undergrad.

“I wish I could say I remembered you in Physics 210,” Weinberg said to laughs as he took the podium.

Weinberg pointed to several hints of something significant going on at the far extremes of tininess. One hint is that the strong force, which weakens at shorter scales, and the weak and electromagnetic forces, which get stronger across shorter distances, appear to converge at that scale.

Gravity is so weak that it isn’t felt at the atomic scale, overpowered by the other forces that operate there. However, Weinberg said, if you calculate how much mass two protons or two electrons would need for gravity to balance their repulsive electrical force, it would have to not just be enormous, but on a similar scale as the other measurements, the equivalent of 1.04 x 1018 gigaelectron volts.

“There is a strong suggestion that gravity is somehow unified with those other forces at these scales,” Weinberg said.

Weinberg also said there are experimental hints in the extremely small masses of neutrinos and in possible proton decay that the tiniest scales are significant in ways that are fundamental to physics.

“This is a very crude estimate, but the mass of neutrinos which are being observed are in the same ballpark that you would expect from new physics associated with a fundamental length,” Weinberg said. “It all seems to hang together.”

A major challenge for physicists is that the energy needed to probe what is actually going on at the smallest levels is far beyond current technology, something like 10 trillion times the highest energy we can harness now. And new technology to explore the problem experimentally is not on the horizon. Even with all the wealth in the world, scientists wouldn’t know where to begin, Weinberg said.

But the experiment may have already been done, by nature, and there may be a way to look back at it, Weinberg said. During the inflationary period immediately after the Big Bang there was that kind of energy, he said, and it would be evident as gravitation waves in the cosmic microwave background, an echo of the Big Bang that astronomers study for hints of the early universe. In fact, astronomers announced they had found such waves earlier this year, though they are waiting for confirmation of the results.

“The big question that we face … is, can we find a truly fundamental theory uniting all the forces, including gravitation … characterized by tiny lengths like 10-17 to 10-19 nuclear radii?” Weinberg said. “Is it a string theory? That seems like the most beautiful candidate, but we don’t have any direct evidence that it is a string theory. The only handle we have … on this to do further experiments is in cosmology.”