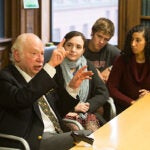 There’s been no shortage of men willing to claim credit for the inventions and discoveries that have led to the Digital Age, but whither the women?

In his latest book, “The Innovators,” journalist Walter Isaacson ’74, a best-selling biographer of Steve Jobs and Albert Einstein, does his best to set the historical record straight, giving pioneering women like Lord Byron’s daughter, Ada Lovelace, and Grace Hopper their due. The book chronicles the complicated evolution and overlooked heroes of computer science and the Internet.

A mathematics professor by trade, Hopper became a trailblazer in computer programming, joining Professor Howard Aiken at Harvard during World War II to work on the Mark I computer. It was here that she first developed a programming language for what would become the world’s first programmable computer. Hopper’s many contributions to the advancement of computer science, as well as her status as one of the few women to receive some recognition for their work in the field, figure prominently in Isaacson’s book.

Hopper’s most important skill was a mastery of both art and science.

“She said if you cannot articulate the concepts of engineering and math well, you’re not going to be good at it. And I think that was one of the keys that made her a good programmer, because she learned languages very well and knew everything from oceanography to sonic booms to atom bombs. She knew how to explain them in clear language and break that down into very clear algorithms,” said Isaacson during a talk Saturday at the School of Engineering and Applied Sciences (SEAS) for an event celebrating women in computer science (CS) and commemorating the late Hopper’s birthday on Dec. 9.

“When Grace Hopper arrives [at Harvard],” he said, “she realizes something that the men don’t realize — the boys with their toys think that the hardware is the main thing. She understands the operating system software will be more important.”

Isaacson, CEO of the Aspen Institute and a Harvard Overseer, spoke before an audience that included many current and retired SEAS faculty, including Dean Cherry Murray; Harry R. Lewis, the Gordon McKay Professor of Computer Science who will become interim dean at the end of December; and David J. Malan, the Gordon McKay Professor of the Practice of Computer Science and leader of CS50, the ever-popular undergraduate introductory course.

Isaacson’s talk was a prelude to a week of student and faculty demonstrations at SEAS that kicks off today.

Later in the session, at a panel moderated by Margo Seltzer ’83, the Herchel Smith Professor of Computer Science at SEAS, four female students discussed their earliest interest in and exposure to computer science while they were growing up, and how that interest evolved once they arrived at Harvard College.

With men representing 65 to 70 percent of CS concentrators, the panelists said finding a community of like-minded women has been important to their intellectual development and to reinforcing their career aspirations. As juniors and seniors, the women say they have a duty to offer a hand up the women coming behind them.

“Everyone is lucky to have gone through the journey and experience that they’ve had,” said JN Fang ’16. “And with luck comes an obligation” to help others.

Fang, who studies computer science with a secondary concentration in global health and health policy, is co-president of Harvard Women in CS and founder of WECode, a national conference for collegiate women in computer science that offers support and networking for women in the field.

Gatherings like WECode, which will take place again in February, or the annual Grace Hopper Celebration organized by the Anita Borg Institute each October, provide vital yet infrequent opportunities for young women to see successful female computer scientists and technologists together. Ideally, organizers say, that convergence of women will inspire students to see a viable career pathway.

“I think that was one of the encouragements for me in switching over from industry to research — seeing so many Ph.D.s, so many both aspiring and tenured female faculty members, and thinking, ‘Wow, I can do that too,’” said Ruth Fong ’15, a computer science concentrator focused on refining machine learning and researching how computer algorithms can process visual information in a way that more closely resembles the human mind. She will study at the University of Oxford next fall as one of Harvard’s two 2015 Rhodes Scholars.

The panel urged men to help break down barriers in the field by doing small things like sharing “nerdy stuff” with their female colleagues, raising work/life balance issues with faculty instead of waiting for the women to do it, and showing a willingness to talk openly about gender-disparity issues with female colleagues.

“Just listening to a woman’s idea would help too,” said Zehra Naz ’15, who studies computer science with a secondary focus in mind, brain, and behavior. “This comes up a lot in conference rooms or in meetings where you’re explaining things and sharing ideas,” but louder male voices end up muffling the women’s, she said.

Seltzer recalled talking with a female friend about times when their ideas had been ignored in meetings or on panels only to have a male colleague offer the same idea or opinion moments later — and be credited for it. She urged colleagues, particularly men, to speak up when this kind of inadvertent bias occurs.

Naz and Ana-Maria Constantin ’16, a joint concentrator in astrophysics and computer science and a WECode organizer, both have worked at Microsoft. Constantin said technology companies need to think more carefully about how they pose questions when they are assessing a candidate’s “passion” for computer science during the hiring process. Often, women and men express that passion in different ways that are no more or less valid than the other.

But looking out for each other is only a start. “It’s not enough just for us to build really strong bonds among ourselves,” said Fong. “It’s important for us to be present and active in the larger Harvard computer science community.”

Such steps can include urging women to become part of the Harvard Computing Society, which Fong said historically has been “gender imbalanced,” and taking advanced courses and serving as teaching fellows.

Fong has been a teaching fellow in CS121, a required course that can be a “formidable barrier” for women thinking of entering the field.

“It’s often the difference between a computer science degree and another S.T.E.M. degree,” she said. “I remember talking to Professor Harry Lewis and then realizing that I would have probably been the only female T.F. if I didn’t recruit another friend of mine to join — and that’s ridiculous because it’s a 150-person course!”

Ultimately, ensuring that there is broad diversity of people working in computer science “is not just a politically correct thing to do,” said Fong, “but it’s because a diversity of opinions matters and is empirically the way to achieve greater success.”