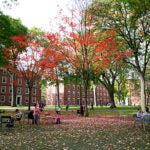 Sacvan Bercovitch, his generation’s foremost scholar of Puritan America and of the cultural echoes that puritanism bequeathed to modernity, died Dec. 8. He was 81.

At Harvard from 1983 until his retirement in 2000, Bercovitch was the Charles H. Carswell Professor of English and American Literature and Language. During those years, he held a parallel appointment in the Department of Comparative Literature, in part because of his continuing work as a translator and champion of Yiddish literature.

Among his honors was the 2007 Bode-Pearson Prize for outstanding contributions to American studies. At the time, John Stauffer, professor of English and of African and African-American Studies, called Bercovitch “one of the great literary historians of the 20th century.” He was, Stauffer added, “one of the first American scholars to analyze the ideological and rhetorical functions of literature and to link art to political and cultural themes.”

A funeral service for Bercovitch was held on Dec. 11 at Levine Chapels in Brookline, Mass. He had lived with his family in nearby Newton.

In the new Harvard Department of English newsletter, longtime colleague Werner Sollors called Bercovitch “the leading Americanist for decades,” a transformative scholar who was “internationally known for his learned and provocative books.”

They included “The Puritan Origins of the American Self” (1975) and “The American Jeremiad” (1978). While at Harvard, he published “The Office of ‘The Scarlet Letter,’” a densely textured 1991 study of a single novel by Nathaniel Hawthorne, as well as “The Rites of Assent: Transformations in the Symbolic Construction of America,” a 1993 collection of his essays.

Said Sollors, “His readers must have guessed that he was, and his colleagues and former students knew him to be, a whimsically self-questioning, disarmingly candid, and charmingly vulnerable man who would surprise you — and then surprise you again.”

Before Harvard, Bercovitch taught at Columbia and Brandeis universities and as a young scholar in the 1960s at the University of California, San Diego. During his career, he also lectured at Princeton and Stanford universities and at others around the world. His books were translated into Chinese, Hungarian, German, Italian, and other languages.

He was an Americanist, one with “a global audience for the way he defined the field,” said Sollors. But his reach and imagination were never narrow.

The first three essays of his career were off the American path — explorations of Fyodor Dostoyevsky, “Sir Gawain and the Green Knight,” and John Milton’s “Paradise Lost.” He later wove other notes into his expanding symphony of scholarship on Puritan America: looks at William Blake, Thomas Mann, William Wordsworth, William Shakespeare, and Thomas Kyd, along with asides in family history, the Holocaust, medical ethics, anthropology, chess, and the challenges of graduate study. (Including Columbia and Harvard, Bercovitch supervised more than 100 Ph.D. dissertations.)

Whatever topic Bercovitch took on, he adopted a fearless voice, people who knew him said. One critic wrote that “The Puritan Origins of the American Self,” the book that four decades ago put the young scholar on the literary map, “so suddenly inspired such intense admiration and controversy.”

Friends knew him to enjoy tweaking authority and to be skeptical of privilege and power, which may have been a legacy from his Marxist parents. Bercovitch, for instance, took delight that he was a kind of upstart who inherited Room 417 in Widener Library, the former office of patrician Harvard historian Samuel Eliot Morison.

“He stylized himself modestly as a Canadian outsider,” said Sollors, “a figure from a Kafka story, or a chess player who has to deal with constantly changing rules.”

Bercovitch was born in 1933 in a Jewish ghetto in Montreal. He was the first son and third child of Alexander Bercovitch and Bryna Avrutik, Jews born in the Ukraine who had survived poverty and pogroms and who all their lives hewed to a utopian socialist dream. (His mother had put her beliefs to work, joining the Red Army in 1917. She was wounded in action in 1919.)

Bercovitch’s euphonious and novel first name was an amalgam of “Sacco” and “Vanzetti,” two native Italian anarchists in Massachusetts who were executed for murder in 1927, despite a massive campaign by supporters who believed them innocent. For many years, the men were revered as folk heroes of the Left.

After a rough childhood that included stints in foster homes, Bercovitch studied briefly at the New School for Social Research in New York and for a year at Reed College in Oregon. Then he gave up higher education to pursue life as a dairy farmer at Kibbutz Nachshon near Israel’s troubled border with Jordan.

Bercovitch returned to Montreal with his first wife, and years later recalled, “All I knew how to do was milk cows.” He juggled a daytime job at Steinberg’s, a grocery store that quickly put him on a management track. The store paid for his night school education at what was then Sir George Williams College. It was there, he said, that he discovered the joys of literature.

From 1992 to 2008, as a form of repayment to his own academic origins, he once said, Bercovitch taught at the Harvard Extension School.

After earning his undergraduate degree in 1961, Bercovitch in 1965 earned a Ph.D. in English at Claremont Graduate School in California. He was already an instructor at Columbia then, starting down the path to explore what made America unique. Fruitfully, he would occasionally swerve off that path.

“Bercovitch is the opposite of a provincial Americanist,” wrote UCLA professor Christopher Looby in a 2002 tribute. “The literary culture of the world — ancient to modern — is the rich background against which he sets the discovered singularities of his adoptive country.”

A Harvard memorial service will take place at 5 p.m. on April 17 at Memorial Church.