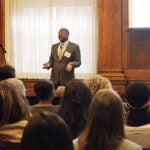 New festival to tap into Boston’s unrivaled intellectual might, with Harvard a sponsor

First came Aspen. Then it was Austin. And now, Boston?

Harvard University, the Massachusetts Institute of Technology (MIT), The Boston Globe, and Harvard-affiliated Massachusetts General Hospital (MGH) will use their convening powers to bring together thought leaders, innovators, and creative disrupters next fall for a week of seminars, hackathons, and other public events to tackle some of today’s biggest global challenges.

Taking the brainy, big-picture approach of the Aspen Ideas Festival and mixing it up with the young, cutting-edge flair of South By Southwest (SXSW), the popular technology, music, and film happening staged each year in the Texas capital, HUBweek, which will run from Oct. 3 to Oct. 10, plans to harness and showcase the region’s vibrant academic, scientific, artistic, and technology communities to brainstorm what’s coming next and how to get there.

Setting aside any old institutional rivalries, “HUBweek will be an exciting annual collaboration in Cambridge and Boston among the world’s best minds and most effective citizens tackling the toughest issues in life sciences, global economic development for all, sustainability, media, and community,” said John W. Henry, owner and publisher of The Boston Globe and principal owner of the Boston Red Sox, during a press announcement Friday at the Ragon Institute in Kendall Square.

“Academic and medical institutions are sites of change, places devoted to curiosity, reflection, and action,” said Harvard President Drew Faust. “Here in Boston, we have spawned an extraordinary economic ecosystem that has created not just jobs and opportunities, but a deeply held and widely shared belief in the power of ideas and the power of people to imagine a better future and bring it into being.”

Explaining why it was important for Harvard to be involved, Faust said, “HUBweek will give a stage and a voice” to the students, faculty, physicians, and researchers in the Boston area who are forging new paths and connections in their work in order to deliver on promising new solutions. “As we saw at Harvard when we created the i-lab and created a space where people came together with their innovations from different parts of the University, it just lifted up everybody’s opportunities to dream and imagine,” she said.

Each institution will schedule and host a range of talks, dinners, seminars, and other activities on their own sites, but also will collaborate and share faculty and resources for other events to better Boston, which in the 19th century earned the nickname “the Athens of America.”

Broadly, organizers say there will be a master class exploring philosophy and other fields at Fenway Park, a documentary film festival, student hackathons, and a tech startup competition. The organizers expect to test digital innovations that can help make cities more responsive and collaborative.

Harvard faculty and Schools, including the Harvard Kennedy School, Harvard School of Engineering and Applied Sciences, and Harvard Business School, as well as the Shorenstein Center on Media, Politics, and Public Policy and the Nieman Foundation, are slated to represent the University at various events.

MIT will host a four-day series of events called “Solve,” which will gather technologists, philanthropists, business leaders, and policymakers to highlight up-to-the-minute research and debate scalable ideas for change.

More details about HUBweek events are expected to be announced in January.

“We have joined with MIT, Mass. General, and the Boston Globe to organize HUBweek, a celebration of the creativity and invention that are part of the very fabric of life in the Boston area,” Harvard Provost Alan M. Garber said in a statement. “HUBweek will foster new connections and collaborations as it showcases the extraordinary institutions and people of Greater Boston who are changing our world every day.”

Peter Slavin, president of MGH, said the teaching hospital will help “give shape, form, and substance to the critical issues” in medicine and health care that will be tackled during HUBweek.

“Indeed, the life sciences represent an area with plenty of important and complicated problems yet to be solved. But the big questions today not only involve finding, through biomedical research, better treatments, cures, and means of prevention for problems like cancer, HIV, diabetes, heart disease, and Alzheimer’s disease, but also figuring out ways to deliver better, safer, and more affordable health care well into the future,” Slavin said.

Asked by Tim Rowe, founder and CEO of the Cambridge Innovation Center, a well-known tech startup incubator, how HUBweek hopes to capture some of the global attention and influence of SXSW and the World Economic Forum in Davos, Switzerland, Faust noted that many of the key organizers behind those events are from the Boston area.

“When we shine a light on it together, I think there is an opportunity to make it more robust, more vibrant … [and] raise the visibility of all this in the eyes of the rest of the world.” She said people “will see Boston in an enhanced light as a result of what will be displayed and accomplished in HUBweek.”