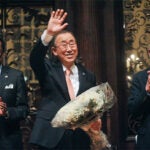 A call for action, and for hope

Leverett House’s McKinlock Hall reopened to students at the beginning of the academic year after 15 months of reconstruction. McKinlock is the second completed project in the House renewal initiative, which is one of the largest and most ambitious capital improvement campaigns in Harvard College history and a major campaign priority.

“There is almost too much to say. The architects and the renovation team did a fabulous job of finding new and very imaginative ways of using the space in the face of all the accessibility constraints. The light court and the below-grade art-gallery-passageway are transformative features that we would never have thought of,” said Mallinckrodt Professor of Physics and Leverett Co-Master Howard Georgi.

“Meanwhile, previously underutilized spaces — like the Rabbit Hole and the art room — have become centers of House life, and the traditional spaces like the dining hall, common rooms, and library theater have been modernized but also restored to their old-Harvard magnificence. I knew that all the wonderful new formal spaces would be great — what surprised me were the informal spaces. The tables in the light court are used many hours a day for studying, informal meetings, or just hanging out.”

Resident Julie Monrad ’15 loves the chance encounters fostered by new common spaces. “The House renewal has been a wonderful change to our home. I was having an impromptu theater rehearsal in the art room downstairs, thinking no one would come in at 11:30 a.m. But sure enough, as I’m belting out ‘Black Horse’ and ‘Cherry Tree’ to my director, a girl comes in to inspect her art project, and I had to just keep going, as if she hadn’t entered, while she continuously gave me bizarre looks. Can’t blame her! Good to know House artists were using the space, I guess!”

“It’s almost overwhelming how many common spaces there are in the renovated McKinlock,” said Mark Steinbach ’17. “There are so many places to socialize and kick back after a long day, which really makes Leverett feel like home.”